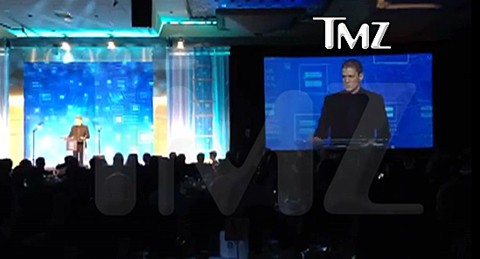 Wentworth Miller spoke at a Human Rights Campaign dinner in Seattle Saturday night, revealing that he tried to commit suicide multiple times because he could not handle being in the closet.

"Growing up I was a target. Speaking the right way, standing the right way, holding your wrist the right way. Every day was a test and there was a thousand ways to fail…A thousand ways to portray yourself to not live up to someone else's standards of what was accepted….The first time I tried to kill myself I was 15. I waited until my family went away for the family and I was alone in the house and I swallowed a bottle of pills. I don't remember what happened over the next couple of days but I'm pretty sure come Monday morning I was on the bus back to school pretending everything was fine."

Miller said the suicide attempted was not a cry for help because "you only cry for help if there is help to cry for."

Of being gay in Hollywood, Miller confessed:

"I had multiple opportunities to speak my truth, which is that I was gay, but I chose not to. I was out privately to family and friends. Publicly, I was not. I chose to lie. When I thought about the possibility of coming out, how that might impact me and the career I worked so hard for, I was filled with fear."

He also spoke about whe he finally chose to come out via a letter declining an invitation to the St. Petersburg Film Festival, after a voice in his head told him that if it gave hope to even one person out there then it would be worth it.

Previous Post: « Boy George Looks Back at Career in ‘King of Everything’ Video: WATCH
Next Post: Head of Sochi Olympics Begs IOC to Quell International Outrage Over Russia’s Anti-Gay Laws »