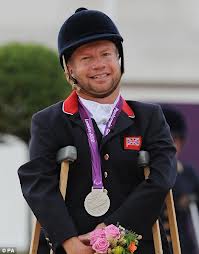 "I don't care if it means I go to prison," he tells the Mail on Sunday. "In some respects I hope I do because then the Prime Minister and my country would have to get involved and that would add to the embarrassment for Russia."

"Those calling for a boycott don't understand that the Olympics and Paralympics could be the one chance these sportsmen and women have to achieve their goals. Yes, they can be sympathetic towards our cause but their first goal must be to do their best. I say to Stephen, Rupert and all those backing a boycott that Sochi is going to happen whatever they say and they should join me so our collective message to Russia is stronger. It's much more powerful to be there than not…But the bigger reason for not boycotting Sochi is that you'd simply be putting your head in the sand. Isn't it much better to educate Russians and shed more light on the legislation both in Russia and worldwide? It is shocking. It's like Germany in the Thirties. We shouldn't ignore this."

Yet the IOC can't say the word 'gay'.