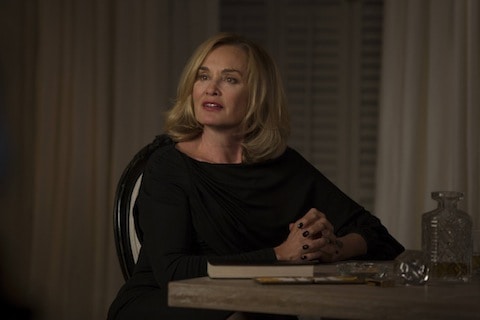 American Horror Story is often warped, but the most recent episode, "The Replacements," may be the most twisted installment in the show's history.

We'll save the juiciest moments for behind the jump, but suffice to say we did not see most of that coming (and some of it we wish we didn't see at all). Also, has Kathy Bates taken up Jessica Lange's Horror Story diet? (It's that one where you only eat scenery, but you can have as much as you want.) That scene of her watching President Obama on television was hilariously over the top.

Relive all the gasps, gross-outs and game-changing moments, AFTER THE JUMP …

The year was 1971, and Fiona Goode (not yet Jessica Lange) was younger, and not nearly as deliciously fabulous/Jessica Lange-ish. Don't get me wrong, she still had a devilish streak. Instead of shipping off to burn her bra with the other students, young Fiona stayed behind for a little one-on-one session with the reigning Supreme, Anna Lee. Less-fab Fiona felt she was ready to take over as Supreme, but Anna Lee didn't quite agree. Fiona then was every bit as strong-willed as Fiona now, and she didn't take too kindly to not getting her way. So she reiterated her intentions, except this time she underscored her enthusiasm with a knife right across Anna Lee's throat. The Supreme is dead, long live the Supreme! 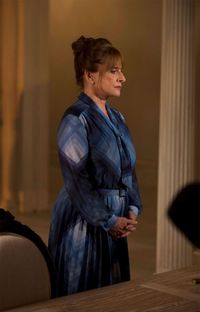 Back in the present, there's a tall drink of water moving in. Luke Ramsey (played by the hella handsome Alexander Dreymon) is unpacking the truck and taking off his soaking wet shirt and just generally being a literal handsome boy-next-door when his Bible-thumping mother, Joan (Patti LuPone), comes out to remind him to cover up and ruin all of our fun. Clairvoyant Nan (Jamie Brewer) does exactly what I would do if I was a psychic, and reads Luke's mind to find out the perfect dessert to bring over as a welcome gift. Of course, Madison (Emma Roberts) has to be a cake block, and invites herself along to deliver it. Madison comes on a little too strong, upsetting Joan's good Christian values and getting both girls quickly booted from the Ramsey home. On their way out, Madison sets the curtains on fire. But with her mind. (Note: This is the second bit with curtains this season. In the first episode, Myrtle Snow [Frances Conroy] remarks on the drapes in Zoe's house. Not sure if this is a clue, a metaphor or if Ryan Murphy just has a thing for window treatments.)

Madison manifesting new powers means she's at least a very talented witch, but it also could mean she's the next Supreme. That's not good news for the old Supreme. Fiona's recent cancer diagnosis all but confirms that the new Supreme is out there and already draining her power. So, Fiona, realizing the time has come to pass the torch to the next promising young woman, decides to graciously acquiesce her throne and assume the role of advisor and tutor for Madison as she takes her rightful place as the new Supreme.

Just kidding! Fiona gets Madison wasted and then slits her throat in the exact spot with the exact knife she used to kill Anna Lee 40 years ago.

Then she utters one of those perfect Jessica Lange lines as Madison bleeds out on the floor:

It's not only Fiona who struggles with change. Madame LaLaurie (Bates) is having a hard time accepting a black man as President of the United States. She sobs and wails and vows to obstruct any of his proposed legislation and, when that doesn't work, she shuts down the government, but Fiona doesn't tolerate racists. If LaLaurie wishes to remain above ground, she will not only serve as the new housemaid, but she will also be the personal slave of Queenie (Gabourey Sidibe).

Left alone at home one night, LaLaurie catches a glimpse of the Minotaur milling about outside the house. Queenie is all I GOT THIS, and sends LaLaurie off to hide. Queenie lures the Minotaur away, and you think it's because Queenie can't be harmed (right?), but she's got something else in mind. She gives the Minotaur a pretty random speech about not being a beast and just needing love and pick me, choose me, love me and all that sort of nonsense. Then she starts to touch herself Divinyls-style and seduce the Minotaur, who slips behind her before suddenly reaching a hand around her mouth. Oh, no!

Meanwhile, Cordelia (Sarah Paulson) still wants a baby, so she visits Laveau (Angela Bassett) for help. Cordelia is all "Hey, buddy, want to do me a solid and conduct a super intense fertilization ritual for me like a real pal?" And Laveau is all, "Sure, I'll totally help you, even though you're the daughter of my sworn enemy who just the other day came in here and burned up all my fancy wigs. Just bring me a mason jar full of your husband's 'baby gravy,' I'll eat a super hot pepper and then slit a goat's throat over your lady business, and you'll be all set." And Cordelia is like "Really?" And Laveau is like "No, dummy, of course I'm not going to do that." So Cordelia's out of baby-making options, and tensions between the Salem witches and the Voodoo witches continue to mount.

In other obviously bad ideas, Zoe (Taissa Farmiga) reaches out to the mother of recently undead Kyle (Evan Peters). She goes over for a little visit, and there are a few red flags. Most notably, Mama Spencer is real quick to tell this relative stranger and grieving teenager how she was about to kill herself right before Zoe called. Instead of immediately distancing herself from the emotionally unstable mother of the boy she barely knew, Zoe thinks the best course of action is to trot out the reanimated corpse of her son. Great plan!

Zoe's off to the swampy home of Misty (Lily Rabe) to pick up Kyle, who's been healing up quite nicely. He's still not speaking, but his outward appearance is much improved. Misty is sad to see her snuggle buddy go, but Zoe is convinced he just wants to go home. So, home they go, promising to come back to see Misty real soon, honest. Zoe leaves Kyle like a big ol' present on his front porch, and his mom is just so happy to see him!

Maybe a little too happy? She climbs into bed WITH HER SON and then proceeds to makeout with him. OK, definitely too happy. But then, what? Wait. What is she doing now? No. Nononononono. Noooooo. Ho boy. Yeah, she's definitely giving some … manual stimulation … TO HER SON. Yikes, Ryan Murphy, come on.

Of course, these aren't all Kyle's original parts, and I guess that's pretty noticeable. So Kyle's mom phones up Zoe to tell her something is off about her son (I guess in addition to all the scars and inability to speak). But, by the time Zoe arrives, Mama Spencer tried to rape her son again, and, this time, FrankenKyle bashed her head in while shouting "NO!"

Yowza, you guys, this episode was a doozy. Incest? Pseudo-beastiality? The Death of Madison? I got to say, I'm not convinced Madison was really the next Supreme. They made a point to tell us that to become the Supreme you need to have mastered seven skills, and we only saw Madison utilize a few powers. I like the idea that Fiona could be so frantic about the threat of a new Supreme that she misses the true Supreme blossoming right under her nose — Zoe.

There are lots of easy ways the writers can bring Madison back from the dead, but I'm hoping they don't go that route. A true death adds considerable danger to the show, and, if Madison was not the next Supreme, such a massive miscalculation on Fiona's part could be a great start to her undoing.

Next week: Fiona tries to pin Madison's murder on Laveau, plus the return of Frances Conroy!

What did you guys think of this episode?

Previous Post: « Patrick Stewart and Ian McKellen Outside NYC’s Stonewall Inn: PHOTO
Next Post: MSNBC’s Thomas Roberts Asks People to ‘Have a Little Faith’ in Him »