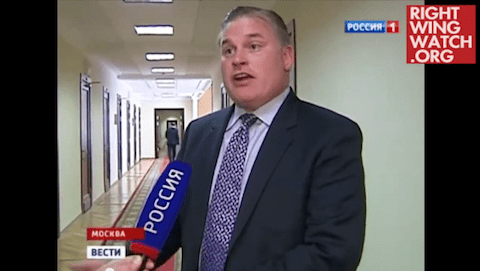 We told you a few days ago how Brian Brown's trip to Russia to encourage an adoption ban by gay parents may have violated the Logan Act, which says:

This section shall not abridge the right of a citizen to apply himself, or his agent, to any foreign government, or the agents thereof, for redress of any injury which he may have sustained from such government or any of its agents or subjects.

Brown, predictably, responded to the allegation by calling it "absurd" and stating “It is laughable how little [Karger] understands that in America we’re free to stand up and speak for things like traditional marriage around the world,” nevermind that Brown wasn't in America at the time of the incident. Rachel Maddow ripped into him for his statements and his reprehensible stance that children should be removed from gay families, even if the child and gay parent are biologically related.

A State Department spokesperson could neither confirm nor deny whether or not they had received Karger's letter, but said, “[I]f and when we do receive it, we will review it and respond appropriately.”

If charged and convicted, Brown could spend up to three years in a federal prison.