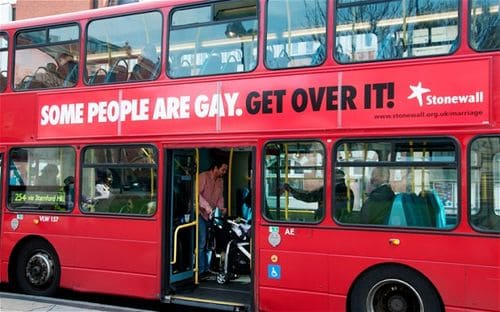 There's a bit of a storm brewing over London city buses these days–or rather, over the advertisements printed on the side of some buses sponsored by UK LGBT rights group Stonewall that read 'Some people are gay. Get over it!' The Telegraph reports:

A traditionalist Christian group has lodged papers at the High Court attempting to force Transport for London to take down hundreds of new billboards on double-decker buses telling people who disapprove of homosexuality to “get over it”.

It claims that transport chiefs are deliberately ignoring a ruling by a High Court judge that the posters, from the gay rights group Stonewall, are “highly offensive to fundamentalist Christians” who believe that gay sex is a “sin”.

In response to the Stonewall advertisements, Core Issues Trust, a Christian group that purports to provide "reorientation" therapy that can turn gay people straight, bought advertisement space on London's buses for billboards that would read 'Not Gay! Ex-Gay, Post-Gay and Proud. Get Over It!'

London Mayor Boris Johnson intervened and banned the Christian advertisements, calling them "clearly offensive" for likening homosexuality to an illness.  In response, Core Issues Trust took the case to court.  From The Telegraph:

In her judgment Mrs Justice Lang ruled that Mr Johnson had not abused his position by banning the adverts but went on to question the decision to allow the earlier Stonewall advertisements as well.

TfL’s decision to allow one advertisement but not the other was “was inconsistent and partial”, she ruled. The outcome of an appeal is due later this year.

"I feel that Stonewall and the Defendant are deliberately flouting the rulings of the court by renewing their advertisement campaign on buses which was clearly prohibited by the earlier judgment of Mrs Justice Lang," Davidson told the court in his application for review.

A spokesman for Transport for London told The Telegraph simply, "These ads are in line with our advertising policy."