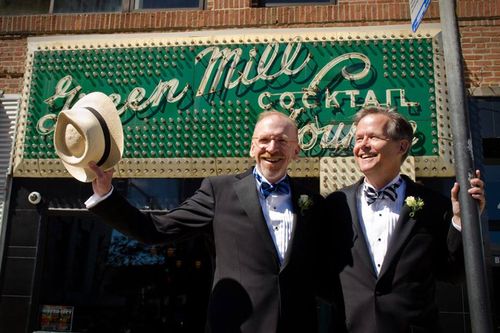 Chicago City Alderman James Cappelman and his partner Richard have been together for more than two decades.  But after waiting anxiously for Illinois to legalize marriage equality, and in light of the disappointing stop-and-start progress of an equal marriage bill over the last year, the couple is heading to Washington state to tie the knot.  The Chicago Tribune has the story:

"We are going to go elsewhere," said Ald. James Cappleman, 46th. "It's kind of sad that a Chicago alderman, an elected official, has to leave his own state. But we'll keep fighting. There's a lot of people who want to get married."

Cappleman and Richard Thale, who met in church, have been together for 22 years. The plan to get married Nov. 22, surrounded by relatives who live out West. The couple already have a civil union in Illinois.

Cappleman is a social worker and longtime community activist in his first term. Thale is the courts advocate for the Town Hall Police District, a Chicago Alternative Policing Strategy beat facilitator and president of the Uptown Chicago Commission.

Cappleman said he first spilled the beans Tuesday night on CLTV's "Politics Tonight" show when asked what it was like to be an alderman and gay. He later posted his plans on Facebook.

The alderman told the Tribune his decision was based in large part on the Supreme Court's June decision invalidating Section 3 of the Defense of Marriage Act.  "Should something happen to either one of us," he wrote in a Facebook post, "we didn't want to take the risk of losing those federal protections that other married couples already have."

Cappleman isn't the other city politician forced to travel outside Illinois to get married: his colleague Deb Mell wed her partner in Iowa.

LGBT advocates in Illinois are pursuing two parallel tracks in their quest for equal marriage rights in the state.  Legislators will seek to pass a marriage equality bill in the veto session this fall, and former state Republican party chair Pat Brady–who resigned after criticism from his own party for his support of same-sex couples' right to marry–is helping the ACLU of Illinois convince GOP lawmakers to back the legislation.

The other track towards marriage equality in Illinois is taking place in the courts.  Late last month, a state judge rejected motions to dismiss two court cases challenging the state's policy of providing only civil unions and not marriage to same-sex couples.  Lambda Legal and the ACLU, who are sponsoring the two cases, are now pressing forward to win a positive ruling from Cook County Circuit Court Judge Sophia Hall that brings marriage equality to the Land of Lincoln.

You can watch Cappleman discuss his wedding in an appearance on Chicago's WGN9 News (warning: autoplay), AFTER THE JUMP…