Richard Tisei, a former Republican congressional candidate and state senate minority leader in Massachusetts, has released a statement announcing an exploratory committee for a 2014 congressional bid. Tisei, who is openly gay and married his husband, Bernie Starr in July, lost the 2012 election for the state's 6th district by less than one percentage point. 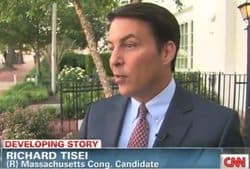 The statement from Tisei reads:

“Like most Americans, I have been deeply disturbed by the dysfunction we are witnessing in Washington.   The critical challenges facing our country have not diminished since 2012.  Rather, they seem to be getting worse. The hyper-partisanship exhibited by both parties on a daily basis has created a stranglehold on our government and is preventing us from moving forward.”

“We are a great country, but we clearly have reached a point where we need new leadership and a fresh start.  We need more responsible Republicans and fewer divisive Democrats in Washington who are willing to stop the name calling, put party aside, and begin to seriously work together to do what is right for America.”

“The creation of this committee will allow me to more actively explore a potential campaign for the 6th Congressional Seat in the 2014 midterm elections.  I hope to be able to make a formal announcement regarding my plans later this Fall.”