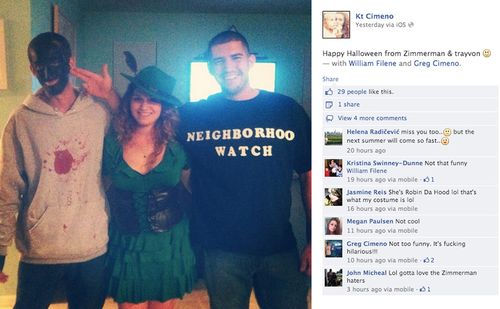 The Smoking Gun, which also has their rap sheet:

The image of the duo was uploaded Friday to the Facebook page of Caitlin Cimeno, a Martha’s Vineyard native who captioned the photo “Happy Halloween from Zimmerman & trayvon.” Cimeno, flanked in the photo by the two men, followed those words with a smiley face emoticon.

Greg Cimeno, 22, portrayed Zimmerman, complete with a “Neighborhood Watch” t-shirt. Cimeno lives in Cape Coral, Florida, where he appears to work for a carpentry firm.

William Filene, 25, dressed up as Martin, covering his face in black paint and donning a gray sweatshirt with a single bullet hole surrounded by fake blood. Filene, who also lives in Cape Coral, was arrested in June for felony auto theft. His rap sheet also included collars for loitering/prowling and failing to register an automobile.