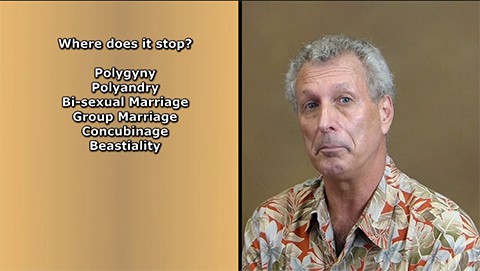 As Hawaii inches closer to passing legislation legalizing same-sex marriage, there are still those voicing their opposition to equality. Jim Hochberg, President of Hawaii Family Advocates, has posted a new video sharing his concerns about the slippery slope he believes the state will find itself on if gay couples are allowed the same rights as straight ones:

"You have to ask yourself the question, 'Well, where does it stop?' We have bisexual people who like to have sex with both their own and the other gender — so should they be able to have two spouses? And then, why not four so that each person can have two of the other and one of the same? Or five? Or whatever…I read on the Internet that a woman somewhere married herself because she had her inner groom. And it’s just getting ridiculous."

Check out Hochberg's enlightened statement for yourself AFTER THE JUMP…

HFA-4 from OFM LLC on Vimeo.