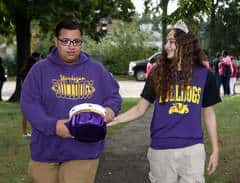 “Ariana and I are both out and open about our sexuality,” Irizarry said. “Our attitude is we are who we are and if that bothers people, that’s OK, but we have so many friends who accept us for who we are.”

“There are some people saying we shouldn’t have won, or that we won because we are gay, but I think our classmates chose us because they know us, and they chose us just as people,” Reiff added.

“Winning this makes me feel good, because it shows me that people care for me,” said Irizarry, who plans to go to college and study business management and marketing. “They understand who I am, and they’re giving me respect. That makes me happy.”

Congratulations to Reiff and Irizarry!

They follow other LGBT high school students around the country who have been feeling the support of their classmates in such elections. Just yesterday Towleroad reported about a New Hampshire high school's transgender homecoming king. However, while student peers may be piling on the accolades, it is important to remember the bureaucratic and real-world implications of these expanding social boundaries; some students have not been allowed to run, while others have been harassed after winning the crown. Here's hoping that the Waukegan students can keep their heads up and feel proud of their victory.

Previous Post: « The Stunning Loophole that May Block Some of France’s Same-Sex Couples from Marrying
Next Post: Lawyer Claims PA Governor Tom Corbett Cannot Be Sued In Federal Court Over Gay Marriage Ban »