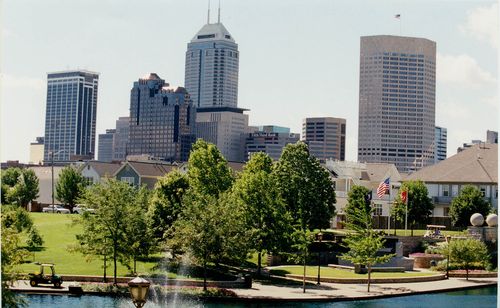 The Greater Indianapolis Chamber of Commerce is the latest high-profile business interest to oppose the amendment, which the General Assembly will consider for the second and final time early next year. If the legislature approves the amendment, called House Joint Resolution 6, then heads to Indiana voters in a statewide referendum in November 2014.

"The Indy Chamber is in the business of strengthening our economy and attracting top talent to our region," John Thompson, chairman of the chamber's board, said in a news release. "The proposed marriage amendment does nothing to help show the nation that Indiana is a place that welcomes all, not just some. And we must be mindful of how actions such as this will impact our competitiveness on a national and global level."

Not only would the proposed amendment enshrine anti-marriage equality language into the state's constitution, it would also explicitly outlaw civil unions, which Indiana does not currently provide.

A recent poll found that two-thirds of Indiana voters oppose the proposed constitutional amendment.  The campaign against the amendment, known as Freedom Indiana, kicked off this summer and is led by campaign manager Megan Robertson, a Republican who supports equal marriage rights.

In a position statement posted on its website, the Indianapolis Chamber of Commerce highlighted Indiana's "brain drain" as one of its reasons for opposing the constitutional amendment:

"Indiana's struggles to retain its college graduates are well documented and often acknowledged in the state legislature. Its necessity to ease this "brain drain" by attracting talent on a national scale would be inhibited by adopting an unnecessary, discriminatory amendment with fading support from younger generations.

"As the only potential marriage amendment up for consideration nationwide in 2014, it is important to be mindful of the conspicuous part HJR-6 would play in portraying Indiana as a state that welcomes some, but not all, talented workers."