Retired Olympic figure skater-turned-NBC correspondent Johnny Weir defended his trip to Russia and his love of the country in an interview with the NYT this week, telling the paper that  his husband, Victor Voronov, a first-generation Russian-American, wants him to speak out and “be more on the side of the gay team.” 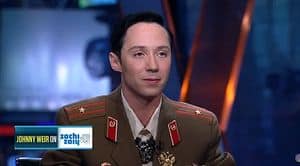 Said Weir to the paper:

"I risk jail time just going there, but the Olympics are not the place to make a political statement. I’m not a politician and I don’t really talk about politics. You don’t have to agree with the politics, but you have to respect the culture of a country you are visiting."

“It’s pretty obvious that I’ve been gay my whole life. I don’t need to break any laws or wear a rainbow pin to show people that I support gay rights. I think I’ll do that just by being in Sochi and supporting our people there and know they are not alone."

"The gay community has not reacted well to me because some people think it’s my responsibility to be an activist. They’re expecting me to hate Russia because I haven’t been given equal rights in Russia.”