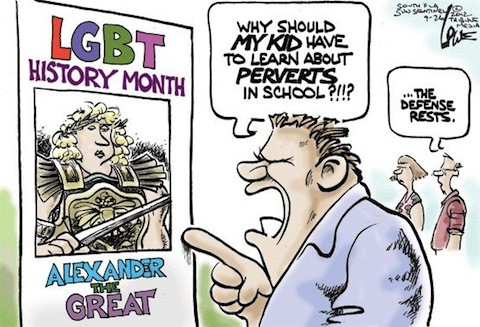 October is LGBT History Month and schools across the nation are educating their students on key historical figures and events such as Stonewall and Harvey Milk. Right on cue, mouthpieces of the far right are engaging in histrionics with Liberty Coucil's Mat Staver claiming that the "innocence of our children is under assault."

If parents think our school children should be focused on science and math, not sex and murder, they need to talk to teachers, principals, and school boards to ensure that this program is stopped.

The funny thing about sex and murder is that they make up a very, very substantial part of history. Black History Month, for example, would have to go because black history in America is riddled with the rape and murder of slaves, as well as the murders of many prominent black leaders who fought for equality. History is not pretty, but it must be examined warts-and-all to be learned from.

Over at the Cherokee Tribune, Roger Hines similarly bemoans Georgia's Kennesaw State University embracing LGBT History Month. Rather than claiming assault on children, he says that the university is "instead of honoring the hand that has fed it, has taken a cultural stand that is anathema to those who foot its bills." Because evidently not a single LGBT person or ally has paid taxes or tuition to the university, ever. The crowning moment in his piece is when, in the middle of defining each of the letters of LGBTIQ, he says:

“I” is for intersex. Don’t ask me about this one, and if you know, don’t tell. I don’t want to know.

Nothing adds to one's credibility in the debate of a social issue quite like open and proud ignorance worn as a medal of accomplishment. Hines snidely concludes that he hopes that KSU provides services for conservative Christians amidst all their inclusivity, but given that a quick search for "god" from the university's student groups returns 10 religious organizations, it's safe to say he has nothing to worry about.