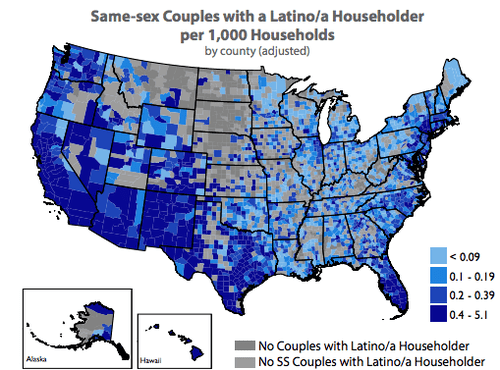 A newly released report by the UCLA's Williams Institute estimates that 1.4 million, or 4.3% of the Latino adults in the U.S. identify themselves as LGBT. The report was conducted, in part, to gain an understanding of the socioeconomic and family situation of LGBT Latinos in the country. Latino Post breaks down some of the report's other findings:

According to the research, areas with higher concentrations of Hispanics have more LGBT Latinos, the leading states being Texas, Nevada and California. Those same states, unfortunately, are states that tend to have fewer legal protections for LGBT people.

"While sometimes less visible in popular representations of LGBT people and families, Latinos make up a sizeable portion of the LGBT population, and they tend to live in Latino, as opposed to LGBT, communities," said co-author Gary J. Gates.

The survey also indicates that of the 1,419,200 LGBT Latinos in the US, it's estimated that roughly 30 percent of same-sex couples who live together also live in populations with high volumes of Latinos. Though, of those couples, a full 63 percent are interracial; one of the partners not being Latino.