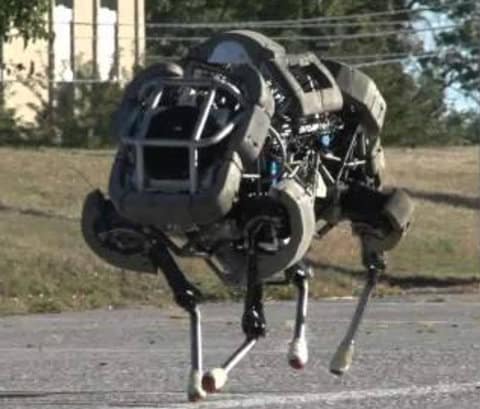 Meet the Wildcat, a four-legged robot that can gallop, run backwards, bound, turn and run on flat terrain. One day developers hope to get it running quickly on all types of terrain.

The group behind the Wildcat — Boston Dynamics — is also the group that developed the 28 mile per hour Cheetah. But unlike the Cheetah, the Wildcat runs only 16 miles per hours and it is wirelessly controlled using a large powerful engine instead of an electrical plug to fuel its movements. In comparison, the fastest man in the world — Olympic sprinter Usain Bolt — can run a top speed of 23.7 mph and even then only in short bursts. Over long distances, the Wildcat would likely overtake Bolt.

The Wildcat is being developed under the U.S. Military Defense Advanced Research Projects Agency's (DARPA) Maximum Mobility and Manipulation (M3) program, a program dedicated to designing robots to "assist in the execution of military operations far more effectively across a far greater range of missions" than what present technology currently allows.

You can add this to the list of super-bots that will one day rule humanity including the cinder-block tossing robot dog, the robot sand fleas, the creepy robo-spider and the sneaky bots that cheats at rock, paper, scissors.

See the Wildcat in action AFTER THE JUMP…