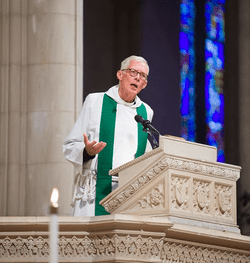 As part of a weekend honoring LGBT young people at the Washington National Cathedral, Rev. Gary Hall (pictured right) spoke out against homophobia and heterosexism, denouncing both as 'sin.' The Huffington Post reports:

"We must now have the courage to take the final step and call homophobia and heterosexism what they are. They are sin. Homophobia is a sin. Heterosexism is a sin. Shaming people for whom they love is a sin," said Dean Hall. He continued, "Only when all our churches say that clearly and boldly and courageously will our LGBT youth be free to grow up in a culture that totally embraces them fully as they are."

He criticized the role that some churches have in advancing oppression of LGBT youth, saying, "It's more than tragic – in fact it's shameful – that faith communities, especially Christian ones, continue to be complicit in putting out children at risk and abetting the attitudes that oppress them, thereby encouraging the aggressors who would subject our children to pain, humiliation, and violence."