A New Jersey diner does not necessarily conjure images of political debate, but Governor Chris Christie found himself embroiled in one on Tuesday morning. When Bert Bueno, a customer at an Edison, NJ diner decided to question Christie about his same-sex marriage politics, the resulting conversation was remarkably calm and reinforced much of what we already knew about the Republican's stance. 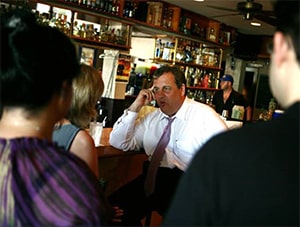 Christie vetoed same-sex marriage legislation last year and, in response to the recent court ruling which affirmed the rights of same-sex couples to marry in the Garden State, he has said that he would like the issue to be decided at the ballot box. His critics believe that same-sex marriage, as a human rights issue, has no place being voted on as a general ballot measure.

"How come you're in opposition?" Bueno, a straight woman, asked.

"Listen: Lots of different people have different views on this," Christie responded. "I think marriage should be between a man and a woman. 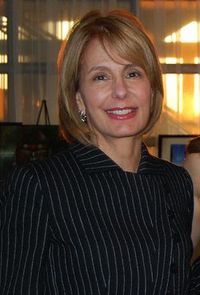 New polls suggest that a ballot measure in support of same-sex marriage would likely be passed. Nearly two-thirds of those polled agreed with Judge Jacobson's decision to legalize gay marriage, and Christie's opponent in the upcoming election, State Senator Barbara Buono (right) is defiantly pro-gay rights.

"Says you," Christie responded. "The fact is: We've been very supportive of a lot of other things, like banning gay conversion therapy. This is an issue where we have an honest difference of opinion. Okay, so you put it on the ballot — you vote your way, I vote my way. And whoever gets the most votes wins."

When asked whether or not he would engage with the LGBT community in order to understand their feelings on the issue, Christie replied:

"I have relatives who are gay, I have friends who are gay," Christie said. "I think I have an understanding. That's not the point. We have a difference of opinion.

He continued: "The fact is: I'm open to having conversations with anybody, but I don't think it's going to change my point of view."

Kudos to Bueno for utilizing a campaign stop, usually reduced to mundane cheering and celebration, for the furthering of a political cause. What do you think of their interaction? Will this press impact his campaign bid negatively?