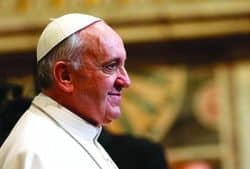 A Quinnipiac University poll released this week found that over two-thirds of U.S. Catholics agreed with Pope Francis' recent statement that the Catholic Church should not focus so much on social issues like homosexuality, abortion and contraception. Reuters reports:

Sixty-eight percent of American Catholics agree with comments the Pope made to that effect in an interview published in the Jesuit magazine Civilta Cattolica, while 23 percent disagreed, according to the poll. There was little difference in opinion between observant and less-observant Catholics, women and men, and among age groups, the poll found.

American Catholics also like their new pope, with 89 percent having a "favorable" or "very favorable" opinion, and only 4 percent voicing an unfavorable opinion, the poll found.

"Maybe they were just waiting for a Jesuit," said Maurice Carroll, director of the Hamden, Connecticut-based Quinnipiac University Polling Institute. Francis is the first pope from the religious order of the Jesuits, an order known for its intellectuals and iconoclasts.

In the [Civita Cattolica] interview, Francis reaffirmed traditional church teachings, but said the church must "find a new balance" or risk seeing its entire moral edifice collapse "like a house of cards."