Sean Hayes tells the L.A. Times that early controversy over his Will and Grace character Jack McFarland being "too gay" made him go back into the closet with the media: 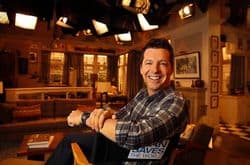 I was so young. It made me go back in the closet [with the media] because I was so overwhelmed at 26 or 27. I didn't want the responsibility, I didn't know how to handle the responsibility of speaking for the gay community. I always felt like I owed them a huge apology for coming out too late. Some people in the gay community were very upset with me for not coming out on their terms. They don't stop to think about what's going on in somebody's personal life, and the struggles that they're having. It was all very scary. We got death threats. It was a really rough time for me, but I was also having the time of my life.