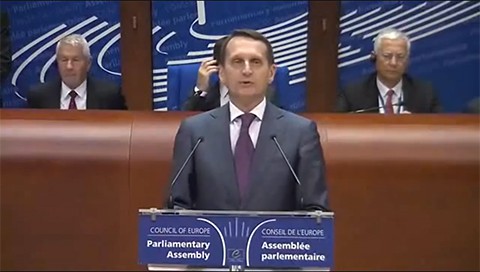 Speaking at the Parliamentary Assembly of the Council of Europe (PACE) in Strasbourg, France on Tuesday, Russian State Duma speaker Sergei Naryshkin attempted to refute the charge that Russia's anti-gay laws negatively impact the rights and freedoms of gay Russians. Naryshkin suggested that one need only make a trip to Moscow's gay clubs to see that the rights of those with "non-traditional sexual orientations" are protected, as Rapsi News reports:

“We have a lot of accomplished people here with non-traditional
sexual orientation. They succeed in business, art and any creative
sphere… They have the right to safe recreation in Moscow and other
Russian cities. There are a lot of gay clubs. I personally have not been
in one, but word goes around that people have a good time there,”
Naryshkin said during a PACE session.

Naryshkin also stressed Russia's conservative roots, explaining that the country has "retained Orthodox values, including the
traditional family," according to RT.com. In a further attempt to make clear how Russia's gay propaganda law does not limit or violate the rights of gay Russians, but instead only protect children, Naryshkin stated: "If you can’t cross the road at a red light, that does not
mean that you cannot walk down the streets."