Alec Baldwin spoke with Gothamist yesterday about his firing from MSNBC and the report in the Post which broke the news. 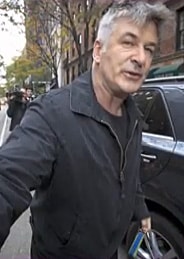 “There’s nothing you can do when you get thrown in this washing machine, nothing. You know? Nothing. All you end up doing is just defending yourself all day long….Martin Bashir’s on the air, and he made his comment on the air! I dispute half the comment I made… if I called him ‘c–ksucking maggot’ or a ‘c–ksucking motherf–ker’… ‘faggot’ is not the word that came out of my mouth. That I know. But you’ve got the fundamentalist wing of gay advocacy—[GLAAD’s] Rich Ferraro and Andrew Sullivan—they’re out there, they’ve got you. Rich Ferraro, this is probably one of his greatest triumphs. They killed my show. And I have to take some responsibility for that myself.”

GLAAD’s Ferraro responded with a statement to Towleroad via email:

“I consider GLAAD’s campaigns to end the Boy Scout of America’s ban on gay scouts, raise national visibility of the violence and inequality facing transgender people, and battling for marriage equality to be among my ‘greatest triumphs.’ But if a teacher, coach, local radio show host, or parent realizes that anti-LGBT slurs are outdated and unacceptable because of this Baldwin issue, I guess we’ll call it a win. Alec Baldwin’s team has not been open to turning this incident into an opportunity for public education and that’s unfortunate.”