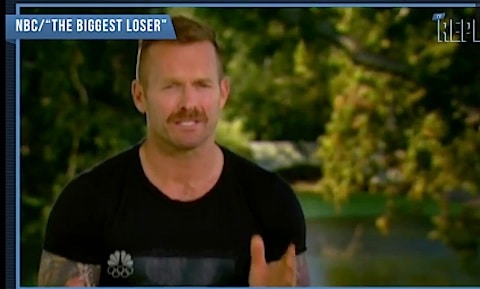 The Biggest Loser trainer Bob Harper came out of the closet as a gay man for the first time on his show to help out a contestant named Bobby who was struggling with his own family.

Said Harper: "I haven’t talked about my sexuality on this show ever. And now, meeting Bobby, I really do believe this is the right time. I want to show Bobby that he doesn’t have to live in shame. When I came out, when I was 17 years old, it was one of those things where I realized that there was going to be so many obstacles, but being gay doesn’t mean being weak. And being gay doesn’t mean that you are less than anybody else. It’s just who you are.”

Harper later went on Twitter to thank his followers: "THANK YOU to everyone that supported my decision to talk about being gay w/ Bobby. I felt like it was appropriate & necessary. LOVE Y'ALL!!"

Previous Post: « Pat Robertson Reveals the Secret Behind How He Stays Fit: VIDEO
Next Post: Alec Baldwin Blasts ‘Fundamentalist Wing of Gay Advocacy’, GLAAD and Andrew Sullivan, for His Firing »