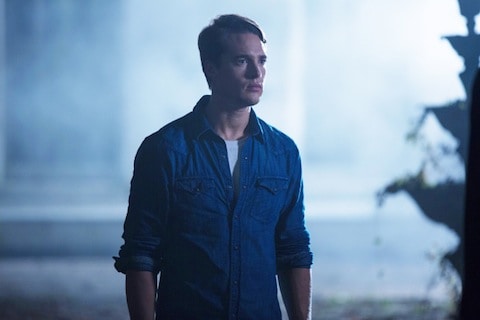 One could argue that Ryan Murphy has a lot in common with Lady Gaga. For example, both of them are better when they stick to keeping it fun and not getting wrapped up in overindulgent symbolism. Tonight's episode may have beat viewers over the head with a bit of mother-daughter drama, but it was also uncharacteristically cohesive. This season's many storylines are staying masterfully woven together. It's a problem that plagued last year's messy Asylum installment. Glad to see the creative team is keeping things tight this time around.

Catch up on all the action and learn how to rid your lawn of pesky zombies, AFTER THE JUMP … We pick up right where we left off last week. It's Halloween and Marie Laveau (Angela Bassett) has unleashed the undead right onto the doorstep of Miss Robichaux's Academy. Inside, Madame LaLaurie (Kathy Bates) is whipped into a panic over the sight of her three very dead daughters. It seems they have a bit of unfinished business.

Back in the day (1833, to be exact), LaLaurie was hosting a very fancy Halloween party. In a disgusting reversal of the ol' "fill a bowl with grapes and tell 'em it's eyeballs" gag, LaLaurie filled her chafing dishes with actual slave eyeballs and entrails and all kinds of nasty gobbledygook. The only problem was that LaLaurie's festive party games were scaring away all the girls' suitors. So the girls conspired to kill their wretched mother, but before they got the chance, LaLaurie caught wise to their little scheme and treated them to a bit of her signature brand of torment.

In the present, it would seem it's the daughters' turn to torment dear old mom. What follows is a series of terrible decisions by almost all everyone inside the academy. First, hunky (but not very bright) neighbor Luke (Alexander Dreymon) goes skipping out onto the lawn thinking this is just a prank by a bunch of neighborhood kids. Once he sees one of the zombie flock tear a passerby asunder, he's more than convinced. Zoe (Taissa Farmiga) is like "Everybody upstairs!" which is for sure never a good idea in any horror story She recommends Spalding (Denis O'Hare)'s room in the attic, but he's all no, nope, nuh-uh, no need to go to my creepy doll room where Madison (Emma Roberts) continues to decompose. So they settle on hiding out in Queenie (Gabourey Sidibe)'s room.

As they disperse, LaLaurie makes her way to the door. As she's unlocking it, Zoe reminds her that this, in fact, is a terrible idea and that those rotting corpses out there are not her daughters anymore. Now, let's go barricade ourselves upstairs without any exits, come with me if you want to live, etc.

Just as they're heading upstairs, Nan (Jamie Brewer) disappears, and it's like, damnit, Zoe, you had one job. Nan is racing outside to rescue Luke, but it's not long before they're overwhelmed. While Zoe works on a distraction, one of LaLaurie's daughters makes her way inside. Of course, it's LaLaurie who manages to kill her once and for all (with a fireplace poker through the heart, not the head, like on other zombie shows). It's her way to show a little mercy as an apology for a lifetime of cruelty because SYMBOLISM.

Outside, Nan and Luke draw the attention of the zombie horde before Zoe shows up with a chainsaw and hacks them all to bits. After Nan and Luke make their escape, the chainsaw runs of out gas. But! With a wave of her hand, Zoe dispatches the last zombie and sends a levitating Laveau crashing to the floor. A supremely cool more there, Zoe.

Back at the hospital, it appears Cordelia (Sarah Paulson) is blinded after being attacked by acid. Fiona (Jessica Lange) is devastated, and spends some time wandering the halls of the hospital in a drunken haze to cope. She stumbles into a room of a woman who recently gave birth to a stillborn daughter. Fiona forces her to hold her dead baby and talk to it on and on because clearly Fiona is projecting (and Ryan Murphy is ham-fisted). The young mom repeatedly tells the baby it's beautiful and she loves it. Then Fiona breathes a little magic life in the baby because SYMBOLISM.

When Delia's cruddy husband shows up, he has a small spat with Fiona, before she leaves the two of them alone. When he touches Cordelia's hand, she has a psychometric experience and sees glimpses into his dalliance from last week's episode. It's as if now that she's blind, she can finally see the truth. (SYMBOLISM!) 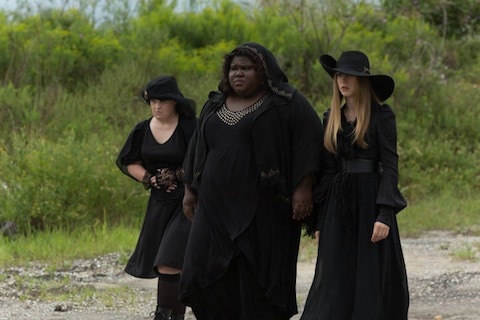 The next day, while Fiona, Zoe and Nan burn up the zombie bodies, there's a surprise visit from the council. Between Madison's sudden disappearance, the zombie throng and Cordelia's acid attack, they're more than concerned. Just as they are poised to seize control of the coven, Fiona turns the tables. She accuses Myrtle of plotting all along to take her down. Fiona and Spalding caught Myrtle lying about hiding in town when Madison disappeared. She was staying in a hotel full of some Beautiful Mind-esque collages adorning the walls featuring pentagrams drawn all over pictures of the Supreme. And Fiona can prove it! Under those fabulous red gloves of hers, Myrtle's fingers are burned by the same acid used to attack her daughter!

Everyone agrees, Myrtle needs to suffer the punishment for attacking a fellow witch: Burning at the stake.

Off they go to set Myrtle ablaze, and, with a final flick of Fiona's cigarette, Myrtle goes up in smoke.

We later learn that Fiona used Queenie to frame Myrtle (though it remains unclear to me if she actually saw Myrtle in the cloak at the hospital). Queenie is feeling some regret about the whole ordeal, but Fiona placates her by telling her she is going to tutor her to realize her full potential. Then she dangles a little "Maybe you're the next Supreme" to keep Queenie interested … and in line.

Don't go feeling so bad for Myrtle just yet. Misty Day (Lily Rabe) just happens to be strolling along the isolated area where they burned Myrtle at the stake and lays her life-giving powers on her little charred head. Welcome back, Myrte!

What did you think of tonight's episode?