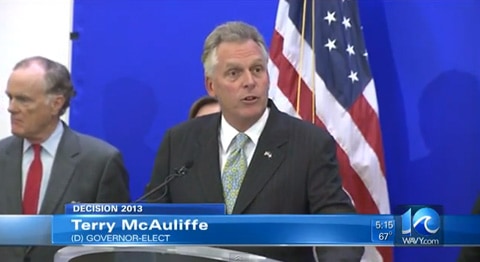 Virginia Governor-elect Terry McAuliffe talked about his first actions as governor in a press conference on Wednesday, the WaPo reports:

Standing in a state Capitol that’s been tarnished by scandal, McAuliffe reiterated a campaign pledge to sign two executive orders on the day he takes office in January. One would limit the value of any gifts to himself or immediate family to $100.

That pledge is a reaction to the gifts scandal that has consumed outgoing Gov. Robert F. McDonnell (R), whose family has accepted more than $160,000 in luxury gifts and money described as loans from Jonnie R. Williams Sr., a businessman who also gave Cuccinelli gifts worth more than $18,000. State law allows office-holders to accept gifts of any size as long as they disclose those worth more than $50.

The other executive order, which McAuliffe said he would sign first, will protect state employees, including gays, lesbians and transgender people, from discrimination on the job.