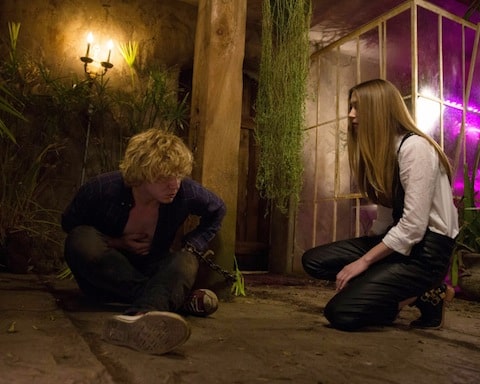 Last week's episode may have left me wanting more Jessica Lange, but not necessarily the sad, drunk Lange we got this week. (Did we learn nothing from last season's miserable Asylum?) At least some of the other characters were able to add a little levity and maintain the camp factor that's made this season so special. This season's spate of new actors have fit seamlessly in with the rest of the Horror Story gang, perhaps even more successfully than Chloe Sevigny and James Cromwell did last season. There's a lot of soul behind Madison's and Queenie's snark, and Kathy Bates makes LaLaurie enough of a lovable doofus to almost forget the digusting atrocities she committed. Almost.

However, if any of Coven's new stars have embraced the over-the-top storytelling, it's Angela Bassett, whose Marie Laveau is played with a delicious wickedness that delicately walks the line between demonic and diva. Finally, someone who can truly go toe-to-toe with Lange. It's exciting to hear there's interest in Bassett and Bates returning for season four.

Let's not get too far ahead of ourselves. There's still plenty of season three left to discuss. From Frankenstein boyfriends, to zombie witches and ghost killers, tonight's episode was all about how it ain't easy loving the undead.

Relive the twists and turns, AFTER THE JUMP …

Now that she's returned from the dead, Madison (Emma Roberts) is bored. She stumbles around Miss Robichaux's just full of ennui, reciting a voiceover that sounds like it came right out an episode of Girls. She can't feel anything. As she traipses through the school being the voice of a generation, she encounters Cordelia (Sarah Paulson), who was woken up by a phone call from her witch-hunting husband. One touch from Delia reveals not only that Madison has risen from the dead, but who it was that killed her.

Elsewhere, Zoe (Taissa Farmiga) has got another undead problem on her hands. FrankenKyle (Evan Peters) is still chained up in Cordelia's greenhouse. She's not aware that he only splattered his mom's brains all over the floor because she was molesting him. She's resolved to take him out back and give him the Old Yeller treatment. But while she starts waxing philosophical about why it has to be this way, FrankenKyle goes all HAHA, GOT YOUR GUN, and snatches the pistol from Zoe's hand. After a brief struggle over the gun, Zoe realizes she can't deprive us of more scenes featuring Evan Peters' butt just kill him, so, instead, she does her best Annie Sullivan Miracle Worker and tries to reteach him how to speak. That's when Madison arrives and tells Zoe that Cordelia is looking for her, and, oh yeah, just leave your vulnerable undead boyfriend here, she totally won't jump his bones as soon as you leave the room. Scout's honor.

Cordelia explains to Zoe that now that she's an Axeman-freeing, zombie-halting witch on the rise, she's going to have a big target on her back. Cordelia knows it was Fiona (Lange) who killed Madison, and she knows once her mother hears how powerful Zoe is becoming, she'll set her sights on Zoe's pretty little throat next. Unless, of course, they kill Fiona first.

This is all almost too much for a young witch to handle. Zoe goes back to her room only to find FrankenKyle bumping undead uglies with Madison. What's a girl to do?

Well, for starters, she marches up to Spaulding (Denis O'Hare)'s creepy attic and reattaches the butler's tongue. Since it's still enchanted and, thus, unable to tell a lie, she asks him straight who really killed Madison. I guess if she is going to have to kill the Supreme, she better get the story verified. Once he confirms what Cordelia said, Zoe kicks off her coven cleanse by murdering Spaulding. Bye, Spaulding!

After a quick scrub in the shower, Madison surprises Zoe with a little proposition: Join her and FrankenKyle in some sort of teenage polyamorous zombie triad. It's an ideal throuple for Zoe, since both of these partners are already dead, but Madison doesn't really strike me as the sharing type.

While the students are out destroying the sanctity of traditional high school romance and plotting to murder their leader, Fiona is having a sexy getaway with the Axeman (Danny Huston). He's arranged a little love shack for them by murdering the apartment owner and leaving his body in the bathtub. Fiona may be feeling down — especially now that her chemo is causing some hair loss — but she's no dummy. She knows this guy is up to something, but it's not the kind of murderous witch revenge viewers were led to believe. Instead, he's been watching Fiona since she arrived at the academy as a little girl, which is kind of gross when you think about it. His feelings for her went from fatherly to … well, something a little more scandalous.

For some reason, the romance of a maybe-ghost watching you since you were barely old enough to tie your shoes is lost on Fiona at first. But when the clumps of her hair continue to fall out, she warms up to the idea and returns to meet the Axeman for another drink. 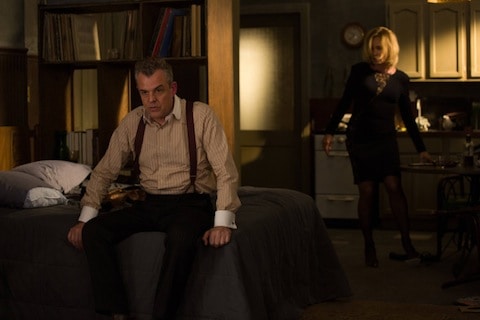 Despite all the hooking up, the real love is blossoming between Queenie (Gabourey Sidibe) and Madame LaLaurie (Bates). They're just like two gal pals, having late-night gab sessions and making 3 a.m. runs for burgers and shakes. You almost forget that LaLaurie is actually a very real monster who committed completely horrendous acts of unimaginable cruelty. The more they spend time together, the easier it is for Queenie to realize that if LaLaurie is the closest thing she's got to a friend at Miss Robichaux's, maybe it's time she explores some alternative schooling.

So off Queenie goes to Marie Laveau (Bassett)'s hair salon. Laveau makes her a pretty straightforward offer: If Queenie brings her LaLaurie, she'll give Queenie a place where she truly belongs.

Much like Zoe, Queenie isn't just taking this at face value. Once she gets home, she finds LaLaurie slicing some ham and plays everyone's favorite slumber party game, Tell Me The Worst Things You've Ever Done And We'll Be Best Friends Forever. LaLaurie hesitates but for a second before recounting how she murdered the illegitimate child her husband fathered with a slave and then made the mother watch her apply the baby's blood to her face. Clearly that's awful, but is that really the most awful? I feel some of the other things we've seen were worse than that. Then again, I guess there really are no winners here.

Queenie escorts LaLaurie to Laveau's under the pretense that LaLaurie is going to get a new hairdo, only to find the Voodoo Priestess ready and waiting. They throw LaLaurie in a cell and Laveau offers Queenie the first cut. Then it's Laveau's turn to brush LaLaurie's blood onto her own face.

There's no new episode next week, but in two weeks we'll see Fiona turn her attention to Misty Day.

What did you think of this week's episode?