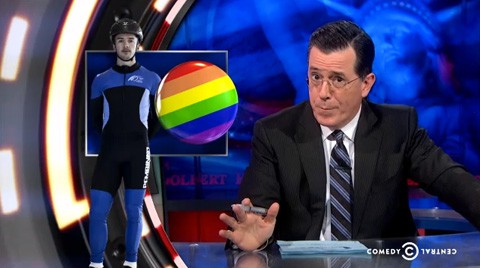 Stephen Colbert loves the Olympics, so naturally he's worried about 'The Gays' ruining the Sochi Games.

"We're all scared. Russia's Olympics are endangered by homosexuals who insist on existing during them."

Colbert also has a message for out speed skater Blake Skjellerup, who has already made clear his intent to wear a Pride symbol if he qualifies for the Games.

"Hey Blake, you really think you need to wear a rainbow pin when you're wearing the man Spanx?"