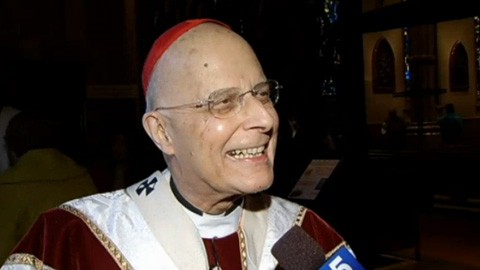 Chicago’s Cardinal Francis George is attacking the Illinois bill legalizing same-sex marriage in a letter he asked to be placed in all church bulletins throughout the Chicago Archdiocese, NBC Chicago reports:

“There will be consequences for the Church and society that will become clearer as the law is used to sue for discrimination,” Cardinal George writes in a letter he asked to be placed in all church bulletins throughout the Chicago Archdiocese.

“The law has made some gays and lesbians happy, and that is not a bad thing in itself,” George adds. “The law, however, is bad law because it will contribute over the long run to the further dissolution of marriage and family life, which are the bedrock of any society.”

NBC Chicago spoke with George about the letter and also about the plans by Springfield bishop Thomas John Paprocki to hold an exorcism as Illinois Governor Pat Quinn signs the bill into law.

Says George: “Each bishop governs his own diocese as he sees fit…”