The Illinois House is set for a final vote on marriage equality and it could come as early as this afternoon, Buzzfeed reports: 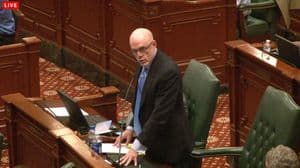 As lawmakers began Tuesday’s session, Rep. Greg Harris, the chief sponsor of the marriage equality bill in the House, amended its language to change the date the legislation would go into effect, and to seemingly reiterate exemptions for private clubs do not want to host marriages for same-sex couples.

The amendment removes lines including the 30-day effective date, which will allow Harris to pass the bill with only 60 votes instead of 71. Rules dictate that bills passed in this “veto session” like this can go into effect June 1, 2014.
The amendment:

Amend Senate Bill 10 on page 1, by inserting immediately below line 16 the following:
“Section 7. Private clubs. Nothing in this Act is intended to abrogate, limit, or expand the exemption for private clubs under Section 5-103 of the Illinois Human Rights Act.”; and on page 10, by deleting lines 5 and 6.

If passed in the House, the bill will be sent back to the Senate for a vote. The Senate already approved the previous version of the bill earlier this year.

Votes are still in play.

“Right now we are taking a wait and see approach and before any decisions can be made, we have to see who is here when we gavel in,” Rep. Sam Yingling, a co-sponsor of the bill told BuzzFeed. “There is a possibility that there will be absent ‘yes’ votes.”

Towleroad has also heard independently that a vote is imminent and that a key co-sponsor, Rep. Naomi Jakobsson of Urbana, has an ill family member and is not yet in Springfield, and that the vote will be taken after she arrives.