Post-Oscar win, JLaw gets dragged back to The Hunger Games

The Hunger Games is not without its charms. Which is a very strange thing to say about a beloved bloody genre franchise about children murdering each other… but then *I'm* not the one suggesting it become a family theme park or inspire a cosmetics line. (Both very sensible and in no way inappropriate spinoffs!) As these things go, it is infinitely preferrable to the Twilight Saga. They're the immensely popular twin (non-identical) poster girls for the increasingly crowded subgenre of YA dystopian fantasies in which a mopey teen passively navigates treacherous waters (and woods) and love triangles with death looming all around her.

Both series trade on grand suicidal gestures ('I'll die of depression/eat the poison berries, if I can't have my man… I swear!') but at least The Hunger Games is self aware. It performs these defiant adolescent gestures with a sly and stately sense of morbid theatricality instead of self-pitying angst and is generally smart enough to express ambivalence about its content beyond the binaries of Team This Boyfriend vs Team That Boyfriend.

But, yes, when we return to the deadly adventures of Katniss Everdeen (Jennifer Lawrence) for HUNGER GAMES: CATCHING FIRE she is flip-flopping between Boyfriends. 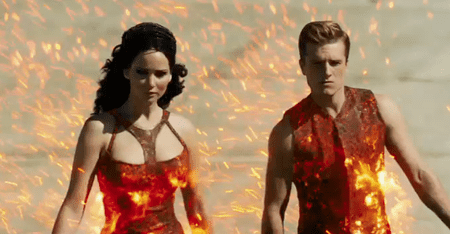 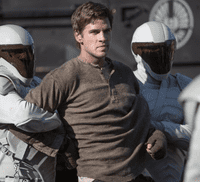 If you need a refresher it's like this: Katniss and Peeta (Josh Hutcherson) were co-victors of the last Hunger Games, a futuristic take on gladiator battles of ancient history. Each year two teenagers from each of 12 districts are dropped into a virtual colliseum if you will to kill or be killed for the amusement of the Capitol and the continued oppression of the the other 12 Districts for whom the annual games are a sick distraction and brutal punishment. There can be only one winner but through a combination of skill, luck, and a sneaky improvised sham romance which put the viewing audience on their side, Katniss and Peeta prevailed together. But secretly Katniss still loves Gale (Liam Hemsworth) back home in District 12. Will she risk it all for love or stick with the practical solution: keeping up appearances by keeping her head down with Peeta?

When the leads embark, reluctantly, on their Capitol-sponsored "Victory Tour" things don't go according to plan; they can't as it's a middle chapter in the franchise! As tension mounts between the ruling class (led by shady Donald Sutherland) and the victors who inspires way too much love in the restless oppressed masses, a new Games master emerges (Philip Seymour Hoffman) to cut Katniss down to size in the cruelest way possible.

I won't spoil the surprises (for those who haven't read the books) but back to the Games we go with a whole new set of "Tributes": Hey look it's character actors Amanda Plummer and Jeffrey Wright as smart eccentric previous winners Wiress and Beetee, Jena Malone who is great fun as axe-wielding perpetually angry Johanna and Lynn Cohen as Mags! My favorite new character was Sam Claflin's Finnick who is hunky, vain, formidable… and gay? I haven't read the books but he doesn't use pronouns when talking about his lovelife so there's that. Mostly though, he engages the imagination because he's actually a bit hard to pin down and therefore capable of surprises. That's rare for this franchise which, like Harry Potter before it, has an immediate and super lame habit of associating Districts/Houses with Good/Evil as if location alone determines one's character. 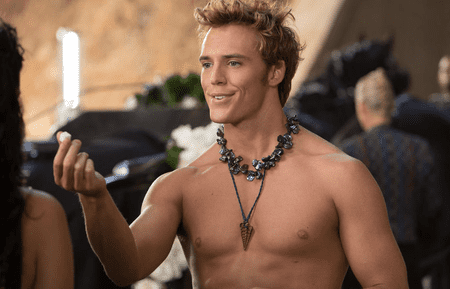 Since the Capitol is obscenely wealthy and willfully blind to or just mean-spirited about the plight of the less fortunate masses in the 12 districts, it's a bit of a 1% vs 99% allegory ("it's more of an 7% vs. 93%" – nitpickers). The series is also, arguably, a riff on Capitalism as America's #1 fanatic religion with its false "Winner takes all!" myth-making and a skewering of Reality TV since the drama is forcibly manufactured/manipulated for entertainment purposes from real life pain and struggle. In short there's a lot to work with for the storytellers. Whether or not The Hunger Games know's what to do with its rich if macabre world-building is another matter.

I'd argue that it doesn't. For one, despite its 146 minute length, it never really investigates the strange world its built beyond how it effects Katniss. For another, like the original film, it lacks the nerve that a premise this sick-making demands. It's got nothing on the emotional and physical brutality of the films that paved the way for it like Battle Royale or Series 7: The Contenders or even They Shoot Horses, Don't They? and so it can't really back up the agonizing drama that the concept requires or earn the survivors guilt that Katniss feels. Notice how Katniss doesn't really kill people (maybe one in each film?) despite being the survivor of a 24 person kill-or-be-killed game. Instead she defeats her enemies in often blameless ways, with fate intervening to do her dirty work lest the audience turn on her.

It's very Disney, actually. "Oops, they fell to their death again!" You know how Disney villains expire so that the blood is never on the Princesses hands. She'd wipe them on her dress and that'd ruin so much future merchandising revenue!

But there are a couple of things The Hunger Games does very well and nearly all of them involve the casting and Jennifer Lawrence. I'd argue that the series wouldn't work at all without a bonafide movie star as its center so they were rolling the dice a few years ago betting on her. In the past couple of years she's more than come through, justifying her "It" Girl success and picking up an Oscar on her way back to the Capitol. This franchise depends on you buying that Katniss, a girl who doesn't do much other than survive, would inspire the masses despite giving them virtually nothing in her public appearances besides flaming gowns and a decent backstory. For a star as lively and gif-worthy as JLaw, Katniss is even a little dull by comparison. But the mask-like composure that Lawrence gives the heroine whenever her life isn't in immediate danger is a smart move. The poor girl from District 12 becomes an ideal tabula rasa. Project your hopes and dreams on to her… she'll carry them for you and live so that your hope might not die.

My three favorite beats in the film all involve Katniss jostled from her innate stillness (which feels like a cross between concentration and catatonia, either one fully justified). There are two comic beats just before the Games where she doesn't know how to react to other Tributes. One kiss throws her completely off guard and Johanna's combination of exhibitionism and fury in an elevator prompts even bigger laughs. Katniss isn't used to people stealing scenes from her and neither is Jennifer Lawrence! It can't be a spoiler to tell you that the heroine survives and the franchise will continue for at least another couple of films. The movie ends with a superb wordless close-up of Lawrence dropping that exquisite mask, for a raw peak right into Katniss's inner fire. It's here, I think, that the drama finally ignites justifying the movie's title and the future rebellion to come. Yes, the end is a maddeningly late place for a movie to raise its temperature but it's a sequel awaiting a sequel so what can you do? I wish it were a cable television series instead, so we could binge-watch Katniss's next death-defying move. 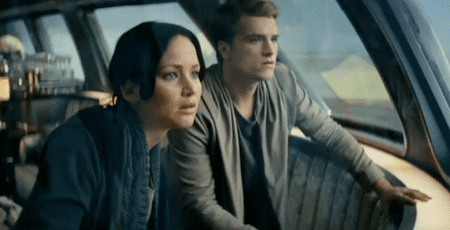