Pennsylvania is the only state in the northeast that blocks gay marriage thanks to a 17-year-old law that bans the recognition of marriage between same-sex couples. 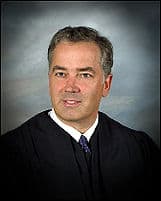 The law soon may be no more as a federal court challenge of the law has been allowed to proceed after U.S. District Judge John E. Jones III refused the motions brought up to block the challenge and dismiss the lawsuit, which was filed in July by the ACLU on behalf on 10 couples and a widow. It's just one of several legal challenges to the state's gay marriage ban.

In his 10-page decision, Jones wrote, "The jurisprudence of equal protection and substantive due process has undergone what can only be characterized as a sea change since 1972," rebutting the defendent's assertions that his court lacks the power to hear the case.

Jones scheduled a conference for November 22 and recommended the lawyers for the case come "fully prepared" to discuss a trial start date.