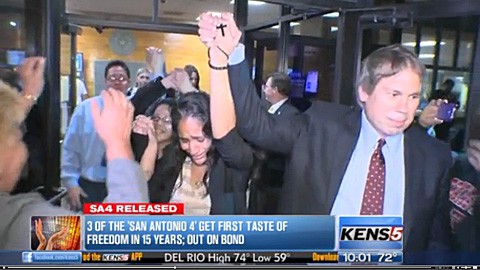 Three lesbians who were among four wrongfully convicted of molestation in 1998 were released today after spending nearly 15 years in prison, the HuffPost reports:

In 1994, Elizabeth Ramirez, then 20, was arrested in San Antonio, Texas, for allegedly molesting her two young nieces, aged 7 and 9.

For more than a decade, the women sought the attention of advocates for prisoners and of the press, insisting that they had been falsely accused, but their calls for help went unanswered. And then, in 2006, a Canadian college instructor named Darrell Otto began researching the case. Otto became convinced that the women were innocent and reached out to the National Center for Reason and Justice, a New York-based organization that pushes for the release of those believed to be wrongly accused of crimes against children. He set in motion an effort to free the women that has finally culminated in victory.

The women have claimed their innocence since the conviction and have worked to clear their names.  They were convicted based upon expert medical testimony that prosecutors and the women's attorney now agree wouldn't stand in court today. Elizabeth Ramirez, Kristie Mayhugh and Cassandra Rivera have sat in prison for almost 15 years.

Anna Vasquez, one of "The San Antonio 4" who spent 13 years in jail and was paroled in 2012 sat down with KENS 5 for an interview.

"We were charged and convicted and I was still in doubt," said Vasquez, 37.  I could not believe that this has happened." The four were only teens when they went to jail.

"It's a huge injustice to us we had many years taken away from us," said Vasquez.  "I was angry I would say I was in shock, disbelief," she said.

Watch a video of their release, AFTER THE JUMP…