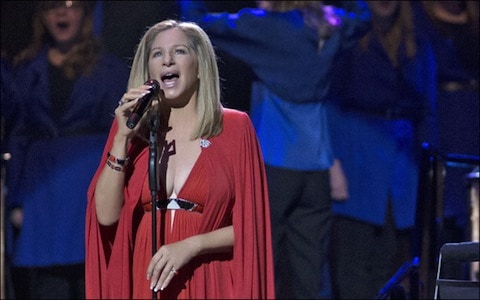 — Skip the Black Friday crowds and settle in with a legend. Relive Barbra Streisand: Back to Brooklyn on Great Performances, Friday at 9 p.m. Eastern on PBS.

More picks and clips, including Lady Gaga's holiday plans and a glimpse at Carrie Underwood as Maria von Trapp, AFTER THE JUMP…

— We're not sure if NBC's The Sound of Music Live!, starring Carrie Underwood (American Idol) and Stephen Moyer (True Blood), will be fabulous or fabulously terrible. Take a look behind the scenes Wednesday at 8 p.m. Eastern with The Making of the Sound of Music.

— Settle in for two hours of holiday shenanigans from Debbie Downer, the Ladies Man and other characters on the SNL Thanksgiving Special, Wednesday at 9 pm. Eastern on NBC.

— Celebrate the ultimate Friendsgiving with Snoopy, Linus and the gang on A Charlie Brown Thanksgiving. Thursday at 8 p.m. Eastern on ABC. This party is B.Y.O.T. — Bring Your Own Toast.

— Have you had your fill of Lady Gaga? Mother Monster joins the Muppets for Lady Gaga & The Muppets' Holiday Spectacular, Thursday at 8:30 p.m. Eastern on ABC. Guest stars include Joseph Gordon-Levitt and Elton John.

Previous Post: « Towleroad Guide to the Tube #1473
Next Post: Gay Couples in Oregon Flocking Across Border to Washington State to Legally Marry »