With Oregon now recognizing all legal out-of-state marriages, gay couples there have been flocking to neighboring Washington state for their nuptials. The Columbian reports: 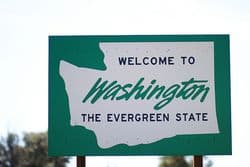 Bizarre or just businesslike, the new legal loophole amounts to a bistate bridge that's carrying loads of same-sex couples across the border from hoping to hitched. Clark County marriage license applications jumped by nearly 50 percent in the 12 business days after Oregon's Oct. 18 legal decision, according to a hand count by The Columbian. Two-thirds of all licenses after that day were for same-sex couples and 90 percent of those were from out of state — the vast majority from Oregon.

The Columbian reports that many of these couples are holding their wedding ceremony at a Clark County church that has made a name for itself as a gay wedding destination for out-of-staters: First Congregational United Church of Christ. 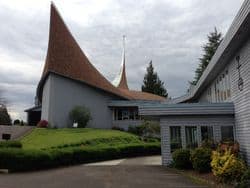 The moment the Oregon decision went public, church administrator Kate Woolley started fielding a steady stream of calls from same-sex Oregon couples. For the past few weeks, Woolley said, she's been taking wedding bookings for nothing but same-sex, out-of-state couples.

"Many of them are from UCC churches in Oregon who still can't get married there," said the Rev. Brooks Berndt. "But not all of them. A number don't have any particular religious affiliation but know they do want to get married in a Christian church."