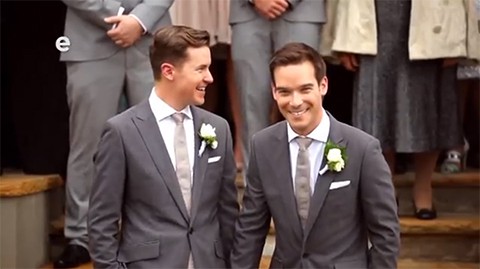 Coca-Cola has stirred a bit of controversy across the pond after the beverage company omitted a scene that depicts two men getting married for the Irish broadcast of a new commercial launched across Europe, according to TheJournal.ie. The ad is said to be tailored slightly to each country in which it is shown. Coca-Cola says that since gay marriage is not yet legal in Ireland, the scene in question was left out whereas it was left in for audiences in the UK, Norway, and Holland as those countries all allow same-sex marriage. However, many took to Twitter to share their displeasure over the omission.

The LGBT publication Eile.ie said that the ad campaign titled Reasons To Believe, leaves the scene out of the Irish version of the new advert.

Highlighting the differences between the Dutch, Norwegian and British versions the new Reasons To Believe advertisement for the other countries shows the scene where two men are getting married.

The Coca-Cola adverts do include different images in each advert depending on the country they are being shown in.

In response to a query from TheJournal.ie, a spokesperson for the company said the advertisement has been tailored for each market where it will be shown and has been informed by consumer research in each individual market.

“The core objective is that the vignettes in the ad resonate with people in each country and that they are truly representative of cultural issues that they are familiar with and value,” they said. “You will note for example that the St Patrick’s Day scene is only included in the Irish version as it is only here that it is truly relevant from a cultural perspective.”

As you rightly say, the wedding images used in the ad for the UK and in other parts of Europe show two men getting married. The reason that this was changed for Ireland is that while civil partnership for gay people is legal, gay marriage currently is not. This will be the subject of a referendum (2015).

“We wanted each ad to be relevant and valid for its own market,” they added.