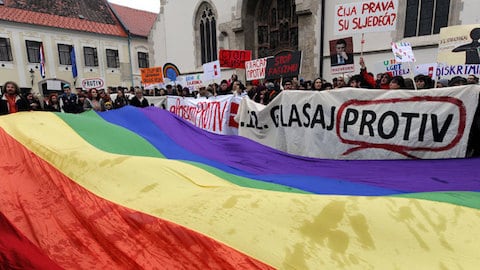 The state electoral commission, citing initial results, said 65 percent of those who voted answered "yes" to the referendum question: "Do you agree that marriage is matrimony between a man and a woman?" About 34 percent voted against.

The referendum was called by the "In the Name of the Family" conservative group after Croatia's center-left government drafted a law to let gay couples register as "life partners."

The Catholic Church leaders have urged their followers to vote "yes" in the referendum. Nearly 90 percent of Croatians are Roman Catholics. 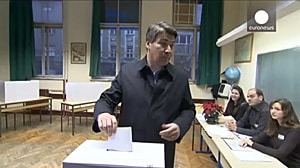 A Catholic-backed petition to push for the referendum received over 700,000 signatures from constituents, so now gays and lesbians must fight an uphill battle for their rights. The ballot measure was deliberately worded so abominably so that anyone reading the question without any sense of context would be more likely to answer "Yes."

Religion and family, as per usual, are the rationales behind denying gay couples equal rights. Croatia's Cardinal Josip Bozanic said in an open letter, "Marriage is the only union enabling procreation. This is the key difference between a marriage… and other unions." The Cardinal did not expand on what other legally-recognized unions Croatia offers to its citizens, nor did he address the issue of elderly, infertile, or deliberately childless couples and the validity of their marriages.

Croatia became a member of the European Union this past July, so it is possible that this ban could threaten the country's membership status as the EU's Copenhagen criterion explicitly forbids discrimination against minorities, and articles 10 and 19 of the EU Treaty and article 21 of the European Charter on Fundamental Rights forbid discrimination based on sexual orientation.

Watch a Euronews report on the vote, AFTER THE JUMP…