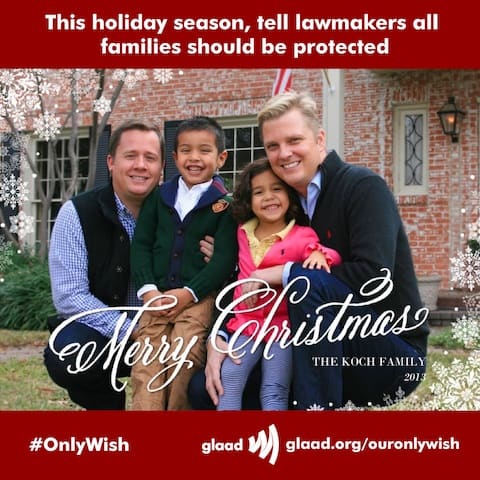 GLAAD has launched a Christmas card campaign targeting governors in the 34 states without marriage equality and is providing addresses and urging LGBT families and allies to share their holiday photos.

Cooper Smith Koch and Todd Koch, who along with their two children were featured in a 2012 JC Penney Fathers’ Day ad, are featured in a card above, and have joined GLAAD in launching the campaign.

Said Cooper Smith Koch: "It's a lot harder to oppose something when you can see its face and you know its name. That's why we're sending a holiday card to Governor Perry, so that he can see the faces of the citizens of Texas that are being harmed by inequality. And so that he can see the love that we have for our children and how it's the same as the love he has for his."

Find out where to send your card here.