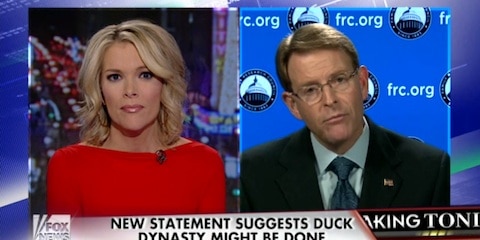 GLAAD’s Jeremy Hooper and Family Research Council hate group leader Tony Perkins joined Megyn Kelly last night for a discussion of Phil Robertson and the Duck Dynasty firestorm. Unfortunately, Hooper and Perkins did not get to share the screen.

Hooper challenged Kelly to hold Perkins accountable for his anti-gay record and vile rhetoric, to which Kelly promised, “What specifically? Because I’ll ask him.”

But Kelly never asked Perkins to explain his extreme stances against the gay community, nor did she acknowledge that the FRC is a designated hate group. Instead she merely identified FRC as “a group whose mission is to advance faith, family, and freedom in public policy and culture from a Christian world view”–a description that continues Fox’s trend of referring to anti-gay extremism as Christianity. Perkins went on to defend Robertson as upholding “biblical morality” and attack homosexuality as “sexual immorality.”

“A&E’s suspension of Phil Robertson shows Hollywood wants to avoid reality. The reality is that the Robertson family are Bible-believing Christians who don’t cherry pick what the Bible teaches.

“Phil Robertson has been targeted simply because he expressed his religious beliefs but there is a clear double standard that is being applied. Nothing was done when homosexual activist Dan Savage screamed profanities at Christian high school students and called them ‘pansy-(expletive deleted).’ However, when Christians simply say homosexuality is wrong and they don’t agree with it, there are demands that they be fired and silenced.

“We have also seen wedding florists, bakers, and photographers hauled into court, fined and even ordered to violate their religious beliefs by participating in same-sex weddings. It is time for all Americans to take a stand against the cultural elites who want to destroy the livelihood of people and remove God and His truth from every aspect of public life.

“The increasing awareness of this collateral cultural and religious carnage that accompanies the redefinition of natural marriage will continue to cause the debate over same-sex marriage to intensify, not abate, despite the media’s relative silence and homosexual activists increasing campaign of intimidation,” concluded Perkins.