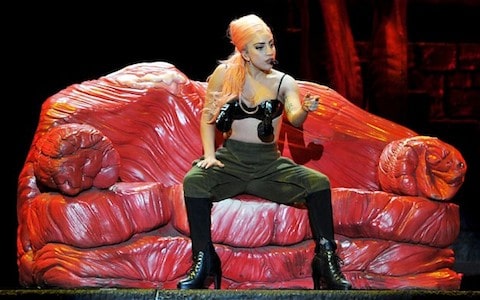 Amidst congratulations to British diver Tom Daley on his recent coming out, Lady Gaga recently shared her feelings on the Olympics, in particular why she's advocating for a boycott of Sochi. From The Independent:

“I don’t think that we should be going to the Olympics at all,” she told Alan Carr on his Channel 4 show Chatty Man.

“I mean, I would never take anything away from [the athlete’s] hard work, I just think it is absolutely wrong for so many countries to send money and economy in the way of a country that doesn’t support gays.”

“They pepper spray and beat them in Russia,” she added.

Despite the fact that Daley, a diver, does not compete in the Winter Olympics, she continued: “It made me very sad to see the pain that some of the gay kids are in in Russia, and for the world to send their finest for the Olympics… I can’t, it just feels so wrong and sad. I hate saying that, because I’m so excited for those like Tom Daley to go and to win and to rejoice.”

Asked whether she would ever go back to the country for a visit, she said: “I don’t think I’m even allowed in anymore because I screamed ‘I’m gay, arrest me’ on stage last time I was there, so…”

Last December, amidst fears that her show would prominently feature "gay propaganda," Gaga told a crowd in Moscow, "You can be gay in my house."

Previous Post: « Stephen Colbert On The Link Between Gay Marriage And Marijuana: VIDEO
Next Post: The Supreme Court Will Rule on Obamacare’s Contraception Requirement. Here’s Why You Should Care. »