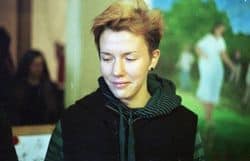 A LGBT activist who was facing deportation to Russia has been released from detention in Britain and taken off the 'fast-track' asylum system after details of her situation sparked an online firestorm and social media campaign. The Independent reports:

Irinia Putilova, a 28-year-old bisexual activist, left St Petersburg six months ago, after fearing for her safety. The activist talked to The Independent from Yarl's Wood Immigration Removal Centre on Monday and said that under Russia's new anti-gay legislation, which criminalises the promotion of non-heterosexual relationships, she did not feel safe to return home. She added that it was "totally impossible" for her to be free in Russia as an LGBTQ person.

While in Britain, Putilova was initially placed in detention and on the tougher fast-track asylum process, which is typically meant for claims that have been identified as uncomplicated and quick to resolve. But many of Putilova's citizenship and immigration documents were still being held in Russia, leading to growing concern that Putilova would not be able to gather the necessary paperwork in time.

More than 5,000 people, including Stephen Fry, ended up signing an online petition asking the Home Secretary to release Putilova from detention. Others, like longtime LGBT activist Peter Tatchell, spoke out against Putilova being placed on the fast-track asylum process.

"It is outrageous that Irinia, or any refugee, is put into fast-track and detained in prison-like conditions. She is not being given enough time to prepare a proper asylum claim. Given that she has already been subjected to sustained harassment and threats, it is unsafe for Irinia to return to Russia."

By the time Tuesday had arrived, the UK government's immigration department, Home Office, announced that it had removed Putilova from the fast-track process and would no longer be keeping her in detention.

"I'm really happy that I got out and I'm really happy to see my friends," she said. "I want to spend my time supporting other people inside. It's cruel detaining people [while they wait for asylum]. It means they can't have normal lives before they are deported. I hope my case helps make asylum for other LGBTQ people from Russia, and from other countries, easier.