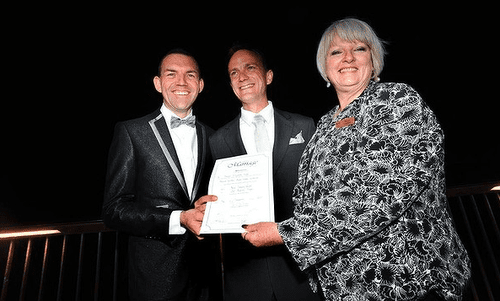 With Australia's High Court deciding to postpone its ruling on the legality of the Australian Capitol Territory's same-sex marriage law, gay couples in Canberra have already begun tying the knot this weekend. In an emotional ceremony at midnight on Saturday, Alan Wright (left) and Joel Player (middle) became the first same-sex couple to say 'I do.' The Canberra Times reports:

"To have it finally legalized, it's a big step for us in our relationship, so we're just wanting to get it done," Mr Player said before the ceremony.

Mr Wright said the decision to get married in the middle of the night was made not for a grab at history, but to fulfill the words of their celebrant Sharyn Gunn [pictured above right] – who performed the couple's commitment ceremony.

"She said the minute it becomes legal, you two are going to be the first I marry," he said.

Mr Player, 30, said he viewed each of the couples making their vows under the ACT's landmark marriage equality law this weekend as the first, but the couple had embraced the prominence of being "12.01" to promote the message of acceptance.

"We're doing it at midnight because that's what we want to do…but at the same time we sort of took it in our stride to use it as a bit of marriage equality shining at the same time, and helping get the voice out there that we are no different," he said.

"It's a bloody giant leap forward for Australia."