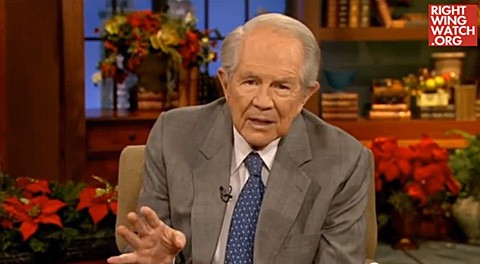 Televangelist Pat Robertson answered a viewer today on whether she should pray for her gay nephew, Right Wing Watch reports:

Said Robertson: "A few years ago psychiatrists and psychologists used to say that homosexuality was a mental illness, now the Supreme Court has said that it is a protected right. So what’s he going to pray about? Is he going to say something is wrong unless he’s unhappy? And if he’s unhappy and realizes he is doing something that makes him miserable, you might help him."

Robertson added that that the viewer should "pray that the Lord will show him his love and his truth and out of that he will find an acceptance of where God has for him.”

Robertson also suggested that abuse as a child is the root cause of homosexuality.

He also momentarily veered off to the topic of transgender people. Last July, he surprised people with his tolerance on the topic, and today defended gender reassignment surgery, noting that "I understand people that need a sex change operation – in other words a woman trapped in a man's body or a man trapped in a woman's body…and they really need some hormones and surgery to get the thing lined up."