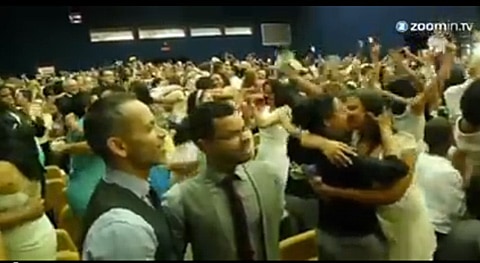 In Brazil on Sunday, approximately 130 gay couples married in a mass wedding, as same-sex marriage became legal in the city/state of Rio de Janeiro. 14 of Brazil's 27 states have legalized same-sex marriage.

In mid-May, Brazilian courts determined that public offices that oversee marriages cannot reject gay couples, even though Brazil's national congress has passed no law on the matter. Some public offices had already been accepting marriage applications from homosexual couples, while others denied them.

Watch a video report on the mass wedding, AFTER THE JUMP…