An openly gay teacher who was on staff at the Holy Ghost Preparatory School in Pennsylvania for 12 years was suddenly fired from his job yesterday – the same day he and his long-time partner applied for a same-sex marriage license. 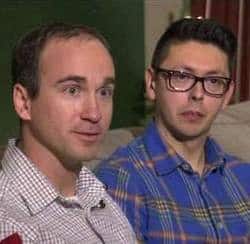 Michael Griffin says he emailed the principal of Holy Ghost Prep earlier in the week saying he may be late Friday, that he was applying for a marriage license. After an in-service day he says he was called into the office of School President Father James McCloskey, along with Principal Jeffrey Danilak. Griffin explains, "He said, 'It's not really a secret here that you're gay.' I said, 'Correct.' He said, 'I assume this is a same sex marriage.' 'Yes.' He said if I go through with it, he had no choice but to terminate my position."

In tears, he left. His over a decade-long tenure at Holy Ghost was over. "I really didn't think that it would happen. At our school we talk about it's a community our motto is 'One heart, one mind.'"

His partner, Vincent Giannetto, tells Action News, "We applied this morning and on the same day he's fired from his job. So it kind of flipped things upside down for us."

Holy Ghost is an all boys Catholic high school located in Bensalem, Pennsylvania.

Griffin has started to receive support from all across the country. He took to his Facebook account to show his appreciation:

“Thank you to everyone for all of your messages of love and support since yesterday. It is so overwhelming and my heart aches over everything that has happened. Holy Ghost helped form me to be the person that I am today. Even though I am no longer employed there, I wanted to share their mission and philosophy, because I feel like I have tried to make it my life's philosophy as best I can, even now. I am trying to move forward with a peaceful heart and wish nothing but the best to my colleagues and students who mean the world to me.”