Aw, R.I.P. Nan (Jamie Brewer). You dead, gurl. For real, it seems. The witches all come together for a funeral for Nan only to be greeted by definitely-not-dead, for real, Queenie (Gabourey Sidibe). She's got Madame LaLaurie (Kathy Bates) on a literal leash and, with Nan's quickie funeral service out the way, they're all marching back to Miss Robichaux's to figure out how to best handle the various things trying to kill them all this time.

Cordelia (Sarah Paulson) is especially committed to Sparkle Motion the Coven. She's determined to get her "second sight" (psychometry) back, by any means necessary. She's also really, really sorry that her husband shot Queenie in the stomach and no one used any magic or Voodoo to figure out if she was dead or not. Queenie is not having it. She tells Cordelia she was a weak leader before, and now the school has (another) dead witch on their hands, as well as the missing Misty Day (Lily Rabe), so maybe she needs to let someone else handle the Coven protecting round here. Delia needs to step up her power game beyond her usual kale smoothies and vinaigrettes, or whatever.

Off Cordelia goes to concoct another potion, which she rubs all over her face. Then she's looking some kind of blade straight in the face and … wait, what are you doing? … you're not gonna … oh, no … please don't do that … please don't OH. She did it. She stabbed herself right in the eye. Twice.

And that's the last we see of Cordelia this episode. When Fiona (Jessica Lange) comes to check on her, she finds Myrtle outside, taunting her. If Fiona goes in to comfort her daughter, as Myrtle savors the opportunity to describe, Cordelia will learn all the dirty little secrets she has (not least among them, drowning Nan). Fiona chooses a cocktail instead, and we're left wondering if Myrtle is being entirely forthcoming about Cordelia's condition … 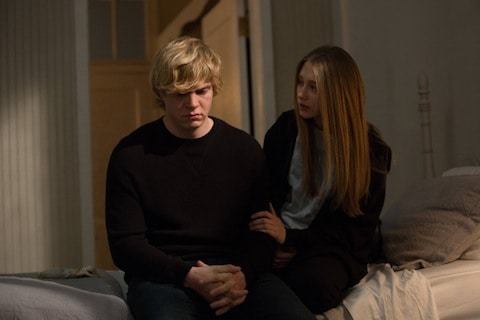 It appears Ms. Snow has her own idea for how to best protect the Coven. After walking in on a dust-up between Madison and Zoe over their shared zombie boyfriend Kyle, Myrtle's got some concerns for Zoe's safety. After Kyle told the girls he loves Zoe and is no longer interested in Madison's dead-on-dead mouth hugs, the reanimated starlet made it clear that she plans to take Zoe and Kyle down.

Zoe finds Myrtle playing her theremin (yes!) when the elder witch offers her two bus tickets and some precious things to hock for cash. Myrtle warns her to leave before Madison (or Fiona) get the chance to kill her. Now, hold on. You are witches. I get broomsticks are likely out of the question, but the bus? I'd rather take my chances with Madison. (Plus, you know, didn't Madison easily kill Kyle the first time BY FLIPPING OVER HIS BUS?!)

But sure, whatever. Kyle makes some grumblings about not wanting to leave because he might hurt Zoe (and not because, ew, the bus), but they grab each other's faces a little and then it's all nevermind! Let's get on the bus! They set off on the bus to … Orlando? YOU'RE MAKING THEM GO ON A BUS TO FLORIDA? No thank you. Cordelia, pass the shears?

If anyone's actually doing anything to protect the Coven, it's Fiona. She really deserves more credit. The witch-hunting corporation has reached out to arrange a little negotiation. They think they're going to bribe the witches to give them all their money back, and then they'll just kill them. This seems like a really bad long con, right? If the witches wanted more money, couldn't they just bippity-boppity-boo some up? I assume the witches won't be paid until they restore the company, in which case, why not just skip the middle man and hocus pocus the cash directly to their purses?

The meeting is set, and Laveau (Angela Bassett) and Fiona are ready to play hardball. Fiona wants a house and Laveau wants a jet and, you know, what, scratch that, they actually just want to murder everyone in the room. And that's when Fiona's axe-wielding boyfriend (Danny Huston) spins around and hacks all the company men to pieces, except for Hank's dad. Fiona wants to finish him off herself. Before she plants the axe in his neck, he warns them that this doesn't end here. With that little bit of business taken care of, Laveau and Fiona have LaLaurie fix them up a couple of her delicious French 75s. LaLaurie's been quite busy since returning to Miss Robichaux's. For starters, she's remembered where she finds her inspiration.

Flashback! It's 1830 and LaLaurie is a bored society woman in New Orleans. When forced to cook her own meal, she slaughters a chicken and is fascinated by its blood. Then she finds an injured slave in her attic, which she takes as an opportunity to bonk him on the head and do her nasty LaLaurie disemboweling thing. Blech.

Back in the present, the heretofore unseen gardener at Miss Robichaux's comes in with a bloody hand injury he got working on the fig trees. The sight reminds LaLaurie what she's been missing. These last few days back at the school just weren't fulfilling with all the maid stuff, like cleaning and cooking soup out of poop (literally) to serve the witches. But now this! This is what she needs! A hobby!

So she brings the gardener up to Spalding (Denis O'Hare)'s old doll-filled room. She does her nasty LaLaurie thing until the poor gardener is all kinds of dead, for real, gurl. Then, poof! It's ghost Spalding, and he wants LaLaurie to fetch him a precious doll for his collection. In exchange, he'll give her magic stuff to momentarily render Laveau mortal so she can kill her. LaLaurie secures the doll and he hands her the magic stuff. It's an ancient, powerful potion called "Benadryl."

LaLaurie, not knowing any better, the poor thing, slips some in Laveau's French 75. When the Voodoo Queen starts feeling groggy, LaLaurie makes her move. She sinks a knife deep into Laveau's very much still immortal chest, and the jig is up. Laveau chases LaLaurie down the stairs, but she's bonked on the head by Spalding. He didn't mean to double-cross, he just needed Laveau out the way. He then helps himself to the baby she stole last week and dresses it up in the gown from the doll LaLaurie got him. Now LaLaurie should bury Laveau and make sure she can't dig herself out. I don't know, y'all, things don't seem to stay buried 'round here too long.

Speaking of which! Next week, Misty's back! The witches battle it out to see who really is the next Supreme. Who is your money on?

Personally, I think it's going to be Cordelia, finally proving to herself and her mother that she's worthy.

But I also think the witch hunters Hank's dad alluded to will make a move and wipe out all the remaining witches in the end anyway. Ryan Murphy loves him a BIG, IMPORTANT MESSAGE, and I think what we're supposed to learn is that all this in-fighting only leaves you (us?) open for attacks from the outside.

Too crazy? Do you want to see a happy ending for our magical maniacs? Share your theories in the comments.