Since tonight's episode, titled "The Seven Wonders," is sort of like the witch olympics, I guess it only makes sense that it begins with an opening ceremony of sorts. And what better way to kickoff the competition than with a softly-lit Stevie Nicks giving a karaoke video-worthy lip-synch to Fleetwood Mac's classic "Seven Wonders" while the witches prepare?

That nonsense out of the way (bye, Stevie!), Cordelia (Sarah Paulson) convenes the girls for a last supper. Delia makes a toast, Myrtle (Frances Conroy) eats some caviar, everyone seems a little uneasy. A pretty unremarkable scene, save for Delia's gender-swapped Bible quote: "When I was a child, I spoke like a child, thought like a child, reasoned like a child. But when I became a woman, I put aside childish things." This is the time for these witches to stop being polite, and start being Supreme.

The first task before them is some simple telekinesis. They make with the candle grabby and quickly tick that box on their Seven Wonder to-do list. They all also pass their mind-control exam, though not without a little bruising. Queenie (Gabourey Sidibe)'s and Misty (Lily Rabe)'s injuries are physical, as they compelled one another to hurt themselves. Madison (Emma Roberts) went the psychological route, instead forcing Kyle (Evan Peters) to kiss her in front of Zoe (Taissa Farmiga). Then Zoe kisses Kyle in front of Madison, so Madison makes Kyle strangle Zoe. What happened to when girls would just write nasty things in their slam books about each other?

Two Wonders down, it's time to go to hell. The girls all assume the position, (never attempt to go to hell without properly stretching first), but, as Myrtle reminds them, it's the getting back that's tough. Queenie is the first back from her chicken shack of eternal damnation. Madison returns and hilariously describes her nightmare fate as being forever Liesl in a live, televised musical production of The Sound of Music. Then there's Zoe, whose hell is just getting dumped over and over? Most of us just call that high school. Good gosh, girl, even in your lame afterlife, you're just boy-crazy.

The only witch that doesn't make their way back is Misty. She's trapped forever dissecting and resurrecting a frog for a science class over and over. Every time she reanimates her specimen, the teacher punishes her by making her kill it over again. Once Misty is stuck in hell, her body disintegrates and she's gone for good. Poor Misty. I like to think that she somehow won't be stuck there forever, and she'll find that Stevie Nicks' Fajita Roundup in the sky. 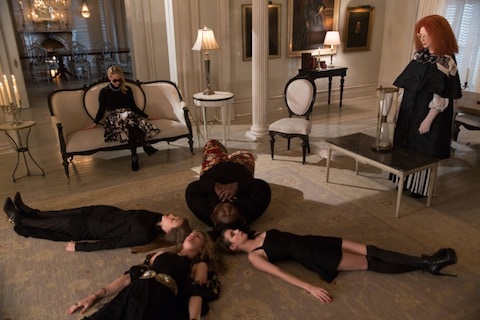 One witch down, Queenie, Zoe and Madison engage in a little transmutation tag. They're BAMF!-ing all over the yard, just having a great time, totally forgetting the life-or-death competition they're presently engaged in, the fact Misty just died in front of them or that one of them just used mind control to have another's boyfriend strangle her. But, whatever, fun! Tag! Yay! Frolic!

It's all fun and games until someone transmutates themselves onto a very pointy spike atop the gate, and this time that honor goes to Zoe, which is surprising since the gate has almost nothing to do with Kyle, and, therefore, doesn't belong in a Zoe story. She's dead now. I, for one, am not sad.

Inside, Myrtle and Cordelia want to take this opportunity for Queenie and Madison to try their hand at bringing Zoe back from the dead. (I mean, since she's already there and all… ) Queenie can't pull it off (even though she just did this last week with Misty, but FINE. SURE.). Madison could bring her back, except for the fact she doesn't want to (which I completely support). She smushes and then unsmushes a fly instead, proving her power, but failing to show the morality needed to be Supreme. (Now there's a new rule … I'd like to see a complete job description for this Supreme gig.)

Madison's also not thrilled about the changing criteria. Clearly she's the Supreme, and she is not going to waste any more time having to prove it. They should just crown her right now.

Unfortunately, technically, this still leaves the Supreme position very much open. Cordelia is lamenting the lack of suitable candidates when Myrtle states the obvious: Cordelia could be the Supreme! She blows through the first few Wonders. When it's time to test divination — a power that apparently involves using pebbles to find information (in this case it's about locating trinkets belonging to old Supremes) — Madison is sufficiently concerned enough to re-engage in the contest. The only problem is that Madison can't seem to perform divination, therefore she must not be the Supreme.

Not surprisingly, this doesn't sit well with Madison. She stomps out of there, vowing to go back to Hollywood and tell everyone about this little school. Once she's upstairs, she's confronted by Kyle, who is more than a little upset that Madison wouldn't bring back his dead girlfriend. Madison tries to tell him that she loves him, but it's no use. He strangles her to death. Bye, Madison!

That's not even her last indignity. Spaulding (Denis O'Hare) appears to claim the body and make Madison his doll once more. Yuck.

Cordelia completes her Seven Wonders (bringing back Zoe — ugh — in the process), and then, poof! She's the Supreme. Her eyes grow back, her garden sparkles, it's all coming together for her.

There's just a little housekeeping to be done first before it's time for the new witch order. Remember when Myrtle eye-scooped and chop-chopped the Council? Well, she's supposed to pay for that crime, and we all know what that punishment looks like. She tells Cordelia she has to burn for what she did. So, Myrtle goes up in smoke, again, but this time for good. No word on who gets her theremin. Bye, Myrtle!

One legacy witch down, and still one to go. As most people saw coming, Fiona (Jessica Lange) faked her death by placing false memories in the Axeman (Danny Huston). Little good it did her, since now she's bald and practically dead anyway. Cordelia first thinks she's there to kill the new Supreme, but the two have (yet another) heart-to-heart. Cordelia always reminded Fiona of her own mortality, while Fiona was "the monster in every one of [Cordelia's] closets." Instead of killing her mother, Cordelia tells her she needs to feel this alone and let go. And, just like that, Fiona goes limp. (Bye, Fiona!)

Of course, we need to get a look at Fiona's hell. She wakes up in a farm house with the Axeman, the domesticated life he dreamed and she dreaded. This is his heaven (which makes so little sense that he would earn heaven while Misty's stuck in hell), but it's Fiona's punishment. She wakes up each day to realize she's there, and then she's cursed to fight with the Axeman and crow forever about "KNOTTY PINE!" in that way only Jessica Lange can. Which leaves Cordelia running the school as the new Supreme, with Queenie and Zoe as her new council. The season ends on Cordelia smiling on the brightly-lit staircase as she overlooks the sea of new witches joining the academy and ensuring the coven's survival.

So I guess that's as happy of an ending as we'd get from this show, right? Cordelia finally realizes her strength, Queenie is respected and Zoe gets to live with Kyle #4ever #inlove #soblessed, or whatever. In the end, Cordelia was the best Supreme choice for the story (though not the most exciting). A Fiona (or Myrtle!) twist would have been fun, but when you think about the season's journey, Cordelia assuming her mother's title after spending her whole life convinced she was a disappointment is a pretty satisfying way to end things.

Overall, AHS's haphazard storytelling continues to be a major stumbling block for viewers, but it's also part of its charm at this point. The anthology format keeps the show from causing too much damage for too long, but there are still plenty of threads that, once the season ends, never really fulfill a necessary space in the story. (Oh how I wish they'd made better use of Patti LuPone… )

I was much more frustrated by this last season, where aliens and Anne Frank were tossed in there alongside corrupt religious leaders, mutants and serial killers. (Oh, and Santa.) But I think Coven's tone lent itself so much more easily to this kind of madcap pacing. By really polishing the style and layering in so much humor, it was easier to bounce between narratives because they were all so entertaining. Last season's dreary Asylum always felt like such a slog (except, notably, "The Name Game" sequence, which seems like it would be right at home in Coven).

I also think this season's cast was a huge contributor to its success. Yes, Jessica Lange is incredible, but it was genius casting to get Angela Bassett and Kathy Bates in the mix. They're the only ones thus far who have been able to match Lange's bigness in this series, and they've done tremendous good in elevating the scenes Lange isn't in. They've proven themselves hungry, and there's plenty of scenery to go around.

You also can't underestimate Sarah Paulson's intensity or Lily Rabe's charm. Rabe especially, in my opinion, has successfully played the widest range of characters on the series so far. I can't wait to see what she shows us next season.

I'd be happy to have a break from Taissa Farmiga and Evan Peters, but I think Tumblr would honestly cease to exist without them. Young viewers are obsessed with the pair, so it would probably be unwise to cut them (or even separate them) next season. I just hope they give them something a little more interesting to do.

This season's biggest revelation? Emma Roberts. She delivered some of the best lines, wore some of the best outfits and always sold everything she did 100 percent. I don't want to speculate that maybe spoiled, Hollywood rich girl isn't a stretch for the young starlet, but she played Madison with such a keen awareness that she had to have been in on the joke.

Roberts, Lange, Bassett and Bates pushed this season safely into the "loved it" category for me. It certainly wasn't perfectly crafted television, but it was a hell of a lot of fun.

Now that Coven's done, what did you think of the season? Were you surprised by the finale?