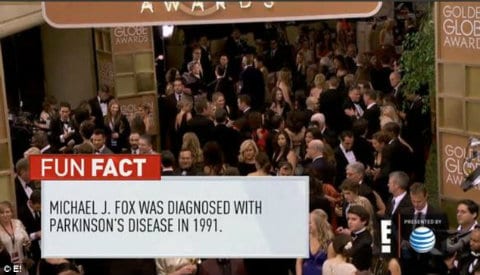 During their broadcast of the Golden Globes this weekend, the E! Entertainment network mentioned actor Michael J. Fox's 1991 Parkinson's Disease diagnosis as a "fun fact" — because getting diagnosed with a neuro-degenerative disease that causes involuntary shaking and dementia is "fun."

"We regret the insensitive classification of Michael J. Fox's Parkinson's diagnosis during our Eonline live stream. We understand the serious nature of the disease and sincerely apologize."

During the same broadcast, E! also mentioned as a "fun fact" that actor "Robert Redford suffered from polio as a child." Crippling childhood illness — fun! No word yet on any apology for that one.