A recent study of 5,000 people conducted by the UK Economic and Science Research Council revealed that “LGBQ participants (lesbian, gay, bisexual and queer) are more generally positive about and happier with the quality of their relationships” than heterosexual couples. 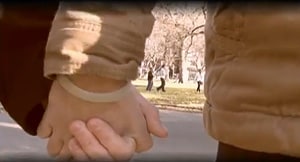 However, the study also found that “Public/private boundaries of ‘couple display’ remain fraught. Many LGBQ couples, especially the younger ones, say they would not hold hands in public for fear of reprisal.”

In one of 50 follow-up interviews conducted by the study, Joe — a 26-year-old from London in a four-year same-sex relationship — said:

“Although I’ve never received physical or face-to-face abuse, I am very aware of stares and raised eyebrows when holding my partner’s hand. It took us a while to have the confidence to hold hands and kiss on the lips in public, for example when saying goodbye to each other.

We spent a year saying our goodbyes at home in the morning rather than on the Tube, despite us both travelling in together, out of fear of potential disapproving looks or abuse. I know in London it’s probably much easier than other parts of the UK, or other countries around the world, but I don’t think we’ll ever feel 100 per cent comfortable in public as a couple.”

In contrast, the study found that heterosexual parents are "the group least likely to be there for each other, to make ‘couple time’, to pursue shared interests, to say ‘I love you’ and to talk openly to one another.”

It also found that "couples without children were generally likely to be happier than parents," and that most partners prefer loving actions — like noticing achievements, giving gifts, cuddling and sharing housework — over just hearing "I love you."