FOX News's resident transphobe Dr. Keith Ablow is back with another column denouncing the California law protecting transgender students that conservatives are currently trying to repeal via the ballot. 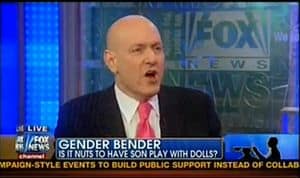 …I believe that children have enough to deal with as they struggle to feel comfortable with their bodies, with the notion of privacy and with later changes involving puberty without urging them to grapple with the notion that their souls may have been born into the wrong bodies.

What’s more, I don’t believe we have definitive data (although many psychiatrists with very impressive credentials, who seem to mean well, assert that we do) that any male or female soul has ever in the history of the world been born into the wrong anatomic gender.

You see, the law, according to Ablow, is all a plot by Governor Jerry Brown to "disempower people":

And shaking the certain knowledge in boys and girls of whether they can count on not being seen naked by the opposite gender, not to mention whether they are themselves actually the gender they thought they were, is a powerful, devious and pathological way to weaken them by making them question their sense of safety, security and certainty about anything and everything.

That way they’re less likely to be in a position to want to be autonomous.

That way they’ll keep on thinking they need people like him to build them a government that suffocates them and deprives them of liberty.