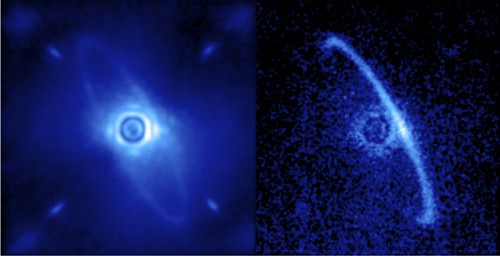 Via the observatory's website: Gemini Planet Imager’s first light image of the light scattered by a disk of dust orbiting the young star HR4796A. This narrow ring is thought to be dust from asteroids or comets left behind by planet formation; some scientists have theorized that the sharp edge of the ring is defined by an unseen planet. The left image (1.9-2.1 microns) shows normal light, including both the dust ring and the residual light from the central star scattered by turbulence in the Earth’s atmosphere. The right image shows only polarized light. Leftover starlight is unpolarized and hence removed from this image. The light from the back edge of the disk is strongly polarized as it scatters towards us. 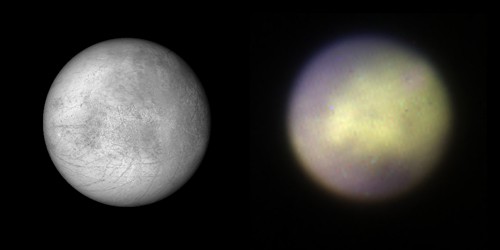 Via the observatory's website: Comparison of Europa observed with Gemini Planet Imager in K1 band on the right and visible albedo visualization based on a composite map made from Galileo SSI and Voyager 1 and 2 data (from USGS) on the left. While GPI is not designed for ‘extended’ objects like this, its observations could help in following surface alterations on icy satellites of Jupiter or atmospheric phenomena (e.g. clouds, haze) on Saturn’s moon Titan. The GPI near-infrared color image is a combination of 3 wavelength channels.