Business Insider points out that Obama is set to make a "pivot" in his State of the Union address tomorrow night: 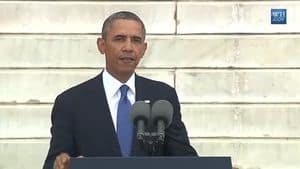 But perhaps the most important part of Obama's speech will be a more forceful outline than ever of how he plans to address those and other items on his agenda. He will say how he plans to get things done himself if Congress won't work with him — through executive action, or, as he and his advisers like to put it, through a "pen and a phone."

For the White House, it's a "year of action."

Currently, people can still be fired for being gay in 29 states. LGBT advocates have long been pushing for an executive order since legislation that would forbid anti-LGBT discrimination in the workplace (ENDA) has been stagnating in Congress for years, and isn't going anywhere fast.

Although the Senate passed ENDA in November, House Speaker John Boehner refuses to bring it up for a vote. That month, Boehner reiterated his assertion that there is no need for such legislation and it would be the basis for "frivolous lawsuits."

President Obama has expressed his frustration over House obstruction of ENDA, saying, following the Senate vote:

"One party in one house of Congress should not stand in the way of millions of Americans who want to go to work each day and simply be judged by the job they do. Now is the time to end this kind of discrimination in the workplace, not enable it."

It seems that ENDA would fit nicely in the President's "year of action" agenda.

Will we see a nod toward it in tomorrow night's State of the Union address, with NBA player Jason Collins sitting in the box with the First Lady? Wait and see.